Virtual Book Tour: Waking Up With The Duke by Lorraine Heath (Guest Post and Giveaway)

Title: Waking Up With the Duke
Author: Lorraine Heath
Publisher: Harper Collins
Published Date: Will be out July 1, 2011
Source: Received an eARC from Goddess Fish Promotions and the publisher as part of the blog tour.

(Note: Don't forget to follow the blog tour. A random commenter during the blog tour could have a chance to win a $25 gc, you know, so you can buy more books! Click here to see the rest of the book tour stops)

From Goodreads.com: "Renowned for his bedchamber prowess, Ransom Seymour, the Duke of Ainsley, owes a debt to a friend. But the payment expected is most shocking, even to an unrepentant rake—for he's being asked to provide his friend's exquisite wife with what she most dearly covets: a child. Living for pleasure, they will give their hearts to no one . . . Lady Jayne Seymour, Marchioness of Walfort, is furious that such a scandalous agreement would be made. If she acquiesces, there must be rules: no kissing . . . and, certainly, no pleasure. Until love takes them by surprise. But unexpected things occur with the surprisingly tender duke—especially once Lady Jayne discovers the rogue can make her dream again . . . and Ransom realizes he's found the one woman he truly cannot live without."

First off, I want that purple dress. Now that that's out of the way, Lady Jayne Seymour only has so much control over her life and what she really wants (a baby), she can't have due to the accident that left her husband paralyzed. When her husband first cooks up the plan for her to spend a little one on one time with his good friend, the handsome and gorgeous Ainsley, Jayne is incredulous but she and Ainsley eventually agree to her husbands plan in order to get that which she most desires, a child of her own and an heir to the Walfort fortune. They don't mean to fall in love but it happens.

It's wholly appropriate that I finished this book on the first real day of summer (June 21); this book is steamy, steamy, steamy. Jayne tries very hard to stay true to her husband and respectful of the rules of the arrangement, but you can easily see why Jayne falls for Ainsley especially in the face of some of the things that her husband was involved in. That aside, Ainsley is ridiculously dreamy. I kind of fell in love with him. He is really interested in trying to help Jayne. He's nice to everyone. He lavishes gifts on those that are less fortunate than himself. There isn't much not to like. When he does fall in love with Jayne, it's the kind of love that just makes you want to giggle with happiness. He really does love her.

One thing that I was a little bit confused about was the story arc about Ainsley's mother. She takes up with a much younger man, which was of course a major scandal back in the day when the story takes place (1860s). It was an interesting story line but wholly separate from the story of Ainsley and Jayne. Maybe it was to give the mother more understanding of the situation? I'm not sure.

Bottom line, this is the perfect novel for when you need to relax and simply escape into a book that will carry you away without thinking too hard. This book is definitely sigh-worthy and a wonderful pick for a summer day!

Ms. Heath was kind enough to do a guest post for A Bookish Affair. Thank you so much!
My Favorite Romantic Heroes:
It’s such a pleasure to be here and to have the opportunity to share my favorite romantic heroes. I have to admit that I read romance for the heroes. The heroines can be wonderful, but it’s always the hero who calls to me.
I have to start with the hero who got me hooked on romance: Will Parker from Morning Glory by LaVyrle Spencer. He was such a tormented hero, with so much basic goodness that I immediately fell in love with him before his first scene was finished.
Michael from Wild at Heart by Patricia Gaffney is an unforgettable hero. The story opens in his point of view. With so few words Patricia showed how lost he was in this world where he was now a captive, being studied because he’d been raised in the wild among wolves. They want him to speak but he knows if he does, he’ll become one of them: a man. It’s simply heartrending.
Roarke from any J. D. Robb book. Okay, Roarke is hot. That’s all there is to it. With the Irish in him. It doesn’t seem to matter how many of the stories I read, I never tire of Roarke and his love for Eve. I think he’s a timeless hero.
Brody Talbot from Warrior Ascended by Addison Fox is the Leo warrior and he lives up to his Zodiac sign. Strong, bold, protective—I just loved him.
I’ve been a huge fan of Anna Campbell since she debuted with Courting the Courtesan, but I thought the Marquess of Ranelaw from Midnight’s Wild Passion was one of her best heroes yet. She opens the story with him and his devious plan to seduce and ruin a woman, and I’m thinking, “How is she going to redeem this guy?” But she did it and the journey was a compelling read.
And okay, I’ll admit that Ainsley from Waking Up with the Duke is one of my favorite heroes. He was so interesting/complex to write. He stayed with me a long time after I finished writing the story which delayed me getting into writing the next story for my editor. But when you run across a yummy hero, you just have to savor him, right?
So who is your favorite hero? 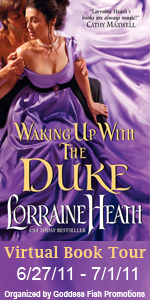