Title: By Royal Command
Author: Laura Navarre
Format: Ebook
Publisher: Carina
Publish Date: July 12, 2012
Source: I received a copy as part of the virtual tour; however, this did not affect my review.

From Goodreads.com: "Two brothers. One woman. Three hearts at war.

Katrin of Courtenay's husband is dead-and she doesn't mourn him. He was cruel and controlling, and she doesn't need a husband to hold her northern keep. But her vengeful uncle, the King of England, has other ideas: intent on marrying her off, he's ordered his Viking-bred warrior to return her to court.
On the journey, the Viking captures her interest, and for the first time Katrin understands passion. But her guard is honor-bound to deliver her to the king, and so it is settled-she must wed the mysterious Rafael le Senay, the Baron of Belmaine.

A forced marriage to a stranger slowly becomes something more, and Katrin realizes she is in love with Rafael. But with the shadow of her former lover hanging over her, and Rafael's powerful brother making dangerous plans, can Katrin negotiate the delicate balance between survival and happiness?"

By Royal Command tells the story of Katrin of Courtenay, the fictional niece of the King of England, the infamous Ethelred. Because of her proximity to the king, her care after the death of her first husband is of the utmost importance to the King. Katrin wants her independence and most definitely isn't wild about the King choosing a husband for her as she did not have the best relationship with her first husband.

Katrin is an interesting character. She wants to get her way but seems to employ some very interesting tactics in order to get her way (sleeping with people just to make a connection). I found myself wondering why the author chose to create a fictional character with such a close familial tie to the King. In this case, this actually works well. Katrin's close relation to the King allows the reader to see all of the things that King Ethelred was facing at the time. England was really getting ready to be under full attack at the time. To say that tensions were extremely high would be a vast understatement to say the very least.

For me, this book definitely ignited a want to read more about this time period. I haven't read much about King Ethelred or the Viking conquest of England. Things were changing at such a rapid pace that I think it would be interesting to kind of compare and contrast what things were like in England before and after.

The romantic action in the book was nice and steamy. This book would definitely make a good beach book. I liked both of the main romances in the book. Katrin seems to give herself up easily in both cases and it would have been nice to see a little more of a fight, especially since she wants to be a lady in good standing in order to be wed to a good match.

Bottom line: A great romance with a lot of interesting history! 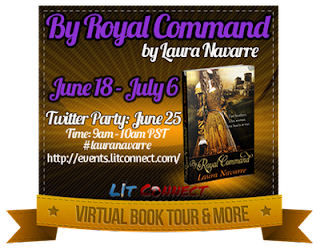