Title: Unaccompanied Minor
Author: Hollis Gillespie
Format: Hardcover
Publisher: Merit Press
Publish Date: January 1, 2014
Source: I received a copy from the publisher; however, this did not affect my review. 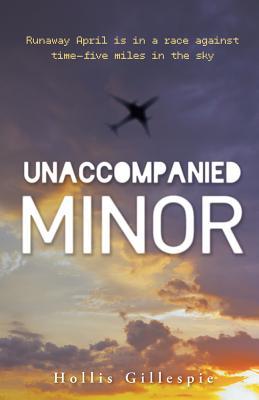 From Goodreads.com: "Fourteen-year-old April May Manning spent her life on airplanes with her flight attendant parents. When her father dies in a crash, April's mom marries a pilot who turns out to be an abusive jerk, and gets Mom confined to a psychiatric hospital. So April takes off, literally, living on airplanes, using her mother's flight benefits, relying on the flight crews who know she's been shuttling between divorcing parents for a year. Then, there's a hijacking, but why is April's "dad" on board? April flees to the cargo hold with another unaccompanied minor she's met before, and they fight to thwart the hijackers, faking a fire, making weapons from things they find in luggage. At last, locked in the cockpit with a wounded police officer, the boy, and his service dog, April tries to remember everything her parents said to do in a crisis above the clouds. But she knows it won't be enough."

"Unaccompanied Minor" is the story of April, a 15 year old girl, who has been semi-neglected by her mother and her psychotic stepfather. She's a runaway that ends up getting up in a chain of events that may end with a plane crashing. This is a fun story told in a very original voice!

April was a really interesting character and I really liked that she was the one narrating the story. Not only do you get a front row seat to the story but you also get a really bright and funny voice in April. April is a huge fan of "MacGyver" and in a lot of ways, April is sort of MacGyver-ish. She is endlessly resourceful and she knows how to get out of a lot because of her smarts.

Probably my favorite thing about this book is the way that the story was told. The story opens as April is being interrogated as to what exactly happened on that plane. The author did a really good job of giving a little bit of detail at a time and allowing the reader to start to put together what happened. There were a lot of twists and turns in this book and I loved the way that it kept me on my toes.

The book was nicely paced. The story was not exactly realistic but it was interesting and entertaining. There were a couple loose ends that I would have liked to see tied up a little bit better such as why April's stepfather was so ridiculous. I didn't really get his motivation at all. Was it spite or something more. I wanted to know more about April's mother too! That being said, overall, this was a really fun, light read!