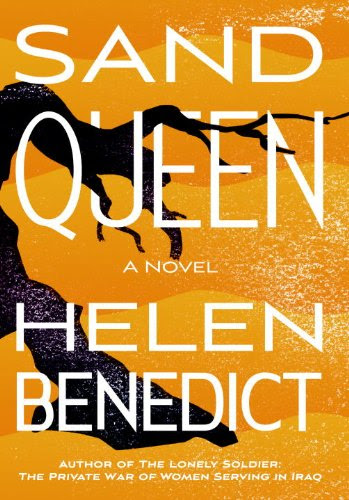 From Goodreads.com: "Nineteen-year-old Kate Brady joined the army to bring honor to her family and democracy to the Middle East. Instead, she finds herself in a forgotten corner of the Iraq desert in 2003, guarding a makeshift American prison. There, Kate meets Naema Jassim, an Iraqi medical student whose father and little brother have been detained in the camp.

Kate and Naema promise to help each other, but the war soon strains their intentions. Like any soldier, Kate must face the daily threats of combat duty, but as a woman, she is in equal danger from the predatory men in her unit. Naema suffers bombs, starvation, and the loss of her home and family. As the two women struggle to survive and hold on to the people they love, each comes to have a drastic and unforeseeable effect on the other’s life.

Culled from real life stories of female soldiers and Iraqis, Sand Queen offers a story of hope, courage and struggle from the rare perspective of women at war."

Sometimes you come across books that you just don't really know what to make of them. I got this book from Netgalley because I was intrigued by the story line. I can't think of any other fiction books off the top of my head that cover the experience of a female soldier on the front lines. I definitely liked the story. It was interesting to see what both Naema and Kate go through and how they deal with it.

I don't know much about what female soldiers deal with as a whole but Kate seems to have the worst out of anything I've ever heard. At first before I realized how much research Benedict had done on female soldiers, I was like "wow, this seems to be exaggerated."  I guess most of my experience is with female officers instead of female enlisted so maybe my perception was skewed.


Another thing, the book often reads like a non-fiction. You all know that I read a good mix of fiction and non-fiction but when I read fiction, I want it to feel like fiction. I want description. I want feelings. Fact is fine but not in an overdose. I would have liked see more showing and not so much telling.


On the other hand, I couldn't put the book down. One really neat element that Benedict uses to pull the reader in is a sort of ambiguous scene at the end of each of Kate's sections where the reader can kind of see foreshadowing of a huge event happening and little by little, the pieces begin to come together.


Bottom line: The good outweighs the bad in this one.