Title: Death at Chinatown
Author: Frances McNamara
Format: Paperback
Publisher: Allium Press
Publish Date: April 16, 2012
Source: I received a copy from the PR; however, this did not affect my review. 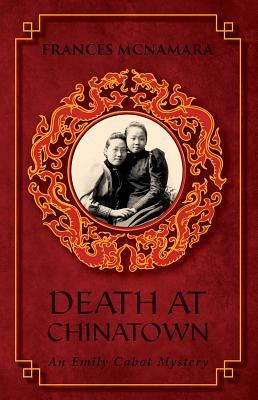 From Goodreads.com: "In the summer of 1896, amateur sleuth Emily Cabot meets two young Chinese women who have recently received medical degrees. She is inspired to make an important decision about her own life when she learns about the difficult choices they have made in order to pursue their careers. When one of the women is accused of poisoning a Chinese herbalist, Emily once again finds herself in the midst of a murder investigation. But, before the case can be solved, she must first settle a serious quarrel with her husband, help quell a political uprising, and overcome threats against her family. Timeless issues, such as restrictions on immigration, the conflict between Western and Eastern medicine, and women's struggle to balance family and work, are woven seamlessly throughout this riveting historical mystery. Rich with fascinating details of life in Chicago's original Chinatown, this fifth book in the Emily Cabot Mysteries series will continue to delight history buffs and mystery lovers alike."

"Death at Chinatown" is a historical mystery that takes place in Chicago in 1896. It is the fifth book in the Emily Cabot mystery series. At its center are three women. There is Emily Cabot, a sharp woman, who has had a lot of opportunities that many women during that time did not have (being educated, getting an advanced degree, etc.). And there are Mary and Ida, two young Chinese women who are also very well educated and become doctors. Both of them are actual historical figures, which made them particularly interesting to read about. They get tangled up in a murder of a Chinese herbalist and it is up to Emily to get on the case!

Although this book is the fifth in a series, it is still very much a stand-alone book. I do think that I missed out on some of the characterization of Emily and her husband, which would have been very helpful in understanding some of their motivations. However, the action itself is very much stand-alone and made for good reading.


There is a lot of historical detail packed in this book, which I liked. The author really does a good job of evoking the time period and many of the social issues of the day that were occurring during that time such as feminism and race issues. The writing of the book was a little stiff in some parts of the book, which took me out of the story a little bit. It took me a little while to get into the book because of this but once the action picked up, I did enjoy this read.
Posted by Meg @ A Bookish Affair at 7:55 AM