Review: In Honor by Jessi Kirby 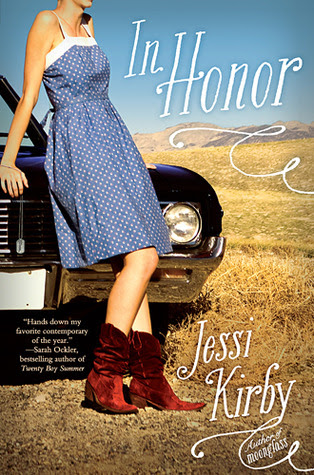 From Goodreads.com: "Honor receives her brother’s last letter from Iraq three days after learning that he died, and opens it the day his fellow Marines lay the flag over his casket. Its contents are a complete shock: concert tickets to see Kyra Kelly, her favorite pop star and Finn’s celebrity crush. In his letter, he jokingly charged Honor with the task of telling Kyra Kelly that he was in love with her.

Grief-stricken and determined to grant Finn’s last request, she rushes to leave immediately. But she only gets as far as the driveway before running into Rusty, Finn’s best friend since third grade and his polar opposite. She hasn’t seen him in ages, thanks to a falling out between the two guys, but Rusty is much the same as Honor remembers him: arrogant, stubborn . . . and ruggedly good-looking. Neither one is what the other would ever look for in a road trip partner, but the two of them set off together, on a voyage that makes sense only because it doesn’t. Along the way, they find small and sometimes surprising ways to ease their shared loss and honor Finn--but when shocking truths are revealed at the end of the road, will either of them be able to cope with the consequences?"

Oh, I absolutely love road trip stories. Happy or sad, they make me yearn for the long, hot summer days and driving with the windows down and the wind blowing through my hair. "In Honor" is the story of a road trip that Honor and her brother's best friend, Rusty, take in order to honor Honor's brother's memory as he has passed away in the Iraq War. This is definitely serious subject matter and falls in the sad but eventually uplifting category. Kirby is a really good writer and knows just how to move you and how to elicit the strongest emotions in you.

This is one of the first if not the only Young Adult fiction book that I've come across that tackles some of the issues coming out of our country's most recent wars. There are so many people that have been affected by the Iraq and Afghanistan wars and there haven't been that many fiction books at all that tackle these subjects. Honor's brother, Finn, seems like a really great brother. You can tell that he had a very special relationship with Honor, which makes his loss so much harder than her. This is also very much a book about coping and dealing with loss, another very difficult subject.

This was the first book that I had ever read by Kirby but I know that I absolutely will be reading more by her in the future. I had heard really good things about this book and Kirby's first book, Moonglass. Honor really feels real. I think that the romance in the book could have been a big cliche but through Kirby's writing, the romance becomes something different and way more realistic.

Bottom line: This is a good book for when you're looking for a serious YA book with good writing! 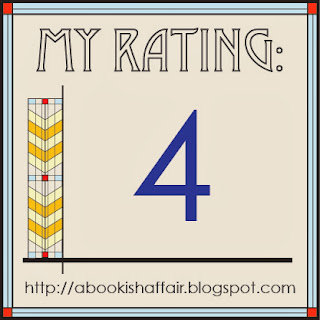