Excerpt and Giveaway: Meet Me at Beachcomber Bay 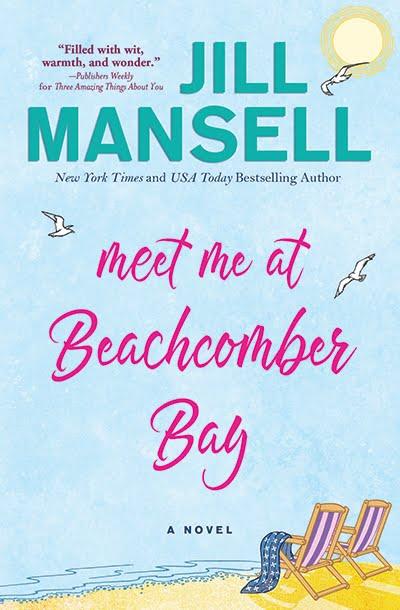 1. A brief encounter that could have become so much more…if only everything were different
2. Step-sisters, bitter rivals in every area except one—by unbreakable pact neither will ever steal a man from the other
3. A love triangle that starts out as a mess of secrets and mix-ups, and only gets worse from there


Welcome to Jill Mansell’s blustery seaside world. Once you step inside, you’ll never want to leave!


With over 10 million copies sold, New York Times and USA Today bestselling author Jill Mansell writes irresistible and funny, poignant and romantic tales for women in the tradition of Marian Keyes, Sophie Kinsella and Jojo Moyes. She lives with her partner and their children in Bristol, England.


EXCERPT
It had happened just before they’d turned eighteen. After almost two years of living together in the prickly way of two teenagers who would far rather not be under the same roof, Belle had acquired a private-school boyfriend called Giles, who’d come to spend a few days with them at Polrennick House the week before Christmas. Typically loud and confident, he’d made a joke one evening about being fought over by the two sisters. The next morning, Clemency had overheard him making a snide comment about her mum having won the lotto jackpot when she’d hooked up with Belle’s father. Later, when she confronted him about it while Belle was upstairs in the shower, Giles had smirked and suggested she was protesting too much. Then, on the last day of his stay, aware of her simmering dislike of him and purely for his own entertainment, he told Belle that her stepsister had made a pass at him.
Belle, believing Giles rather than Clemency, had hit the roof. Clemency, outraged at having been accused of something she hadn’t done, had been incandescent with fury, firstly at not being believed, and secondly because there was no way in the world she’d ever make a pass at the spiteful chinless rat-weasel that was Vile Giles.
Giles had left, but the insult hurling between the two volatile sisters had ricocheted on, and Clemency’s mum and Belle’s dad had been forced to intervene to prevent the upcoming Christmas celebrations being completely ruined. On the surface, at least, a precarious truce had been called.
Two months later, Clemency had begun seeing Pierre, a nineteen-year-old surf instructor who lived in Bude. Pierre was tall and rangy, with sea-green eyes and tangled blond hair. He was a beautiful specimen, confident and funny. A little bit wild, but charming too, he had won Clemency over completely. She’d been smitten, more so than ever before, and the thought of seeing him brightened each day.
Then, at Easter, she went up to Manchester for a week to stay with a friend who’d moved there from Cornwall the previous year. And when she returned, it wasn’t quite the happy homecoming she’d anticipated.
The absence of cars in the driveway had told her that Baz and her mum were both out. Hearing music coming from the first floor, Clemency had made her way up the staircase. When she knocked on Belle’s bedroom door, Belle opened it and said, “Oh, it’s you.” Then, with a little smirk, she allowed the door to swing wide open and added, “Oh dear.”
Except there was no Oh dear about it, because she’d known which train Clemency had been catching and exactly what time she’d be back.
In one way, you almost had to admire her exemplary planning skills, because ensuring that Clemency would be home to see Pierre asleep and sprawled across Belle’s king-size bed in just boxer shorts couldn’t have been easy.
“Why?” Clemency looked at Belle, who was fastening the belt of her green silk robe around her narrow waist. “Why would you do this?”
“Ooh, I don’t know. Maybe because I can?” With an air of triumph, Belle added, “And because it was so easy. And because now you know how it feels.”
Across the room, Pierre’s eyes snapped open and focused on the two sisters. “Oh shit.”
“Hi, honey.” Clemency addressed him with ice in her voice. “I’m home.”
On the outside she might appear cool, but inside her heart felt as though it was disintegrating like a cookie dropped in hot tea.
Pierre said, “Look, it was an accident…”
But Clemency was already shaking her head. “I think you’ll find it was deliberate.” She turned back to Belle. “Do you really like him?”
“He’s got a great body.” Belle shrugged. “We’ve had fun. But he’s not my type.”
“What?” Shocked, Pierre said, “Why not? What’s wrong with me?”
“Seriously?” Clemency counted the reasons on her fingers. “You didn’t have a private-school education, your parents aren’t super wealthy, you ride a moped…”
“So the last week hasn’t meant anything to you?” Pierre stared at Belle in disbelief.
“Well, it meant I got to teach my stepsister a lesson she won’t forget in a hurry. So I’d say that makes it worthwhile.” Belle turned to Clemency. “You can have him back now,” she said flippantly.
“You must be joking. I wouldn’t touch him with a bargepole. I never want to see him again.” By some miracle, Clemency managed to hold herself together, though her voice was perilously close to cracking with emotion. “I wish I never had to see either of you again. God, you deserve each other. The pair of you are just…repulsive.”
“Are we? Are we?” Belle’s eyes were glittering. “Serves you right for making a pass at Giles!”
Posted by Meg @ A Bookish Affair at 4:00 AM