I am very excited to have Kaaren Christopherson here to A Bookish Affair today!

Getting in touch with characters
By Kaaren Christopherson, author of Decorum


Work on Decorum began when Connor O’Casey appeared in my imagination, complete with top hat and silver-handled walking stick, demanding that the story of his Gilded Age pursuit of fortune and respectability be told. Almost before I knew what was happening, he was joined by Blanche Alvarado and Francesca Lund, whose relationship with Connor I didn’t know at first. Then followed Edmund, Nell, Vinnie, the Jeromes, the Worths, and a host of other characters in rapid succession. One of the great pleasures for me of writing historical fiction is developing characters—or rather putting them in situations and watching them interact, react, speak, and grow in breadth and depth as they reveal more and more about themselves.


As the characters absorbed my thoughts away from the computer, I found myself wondering about the characters—about their backstories and how they spend their time “off camera,” outside the plot. I got to know them better, like getting to know new friends, with the added step of documenting what I learned—when and where the characters were born, who their parents and siblings were and their parents’ professions, where they went to school, what jobs they’ve held and where, what religion they practiced, what hobbies they enjoyed or colors they favored or food they liked or pets they owned—a general census of Decorum’s population.


By the time I had gotten to know them this well, the characters began to crop up everywhere. One of the main places I “saw” them was in flea markets and antique shops. As I took particular note of Victorian period clothes, jewelry, and furnishings, I would happen across items that I felt might have belonged to them. A cup and saucer found at a local antique shop occupied space on my desk while writing Decorum; I knew it “belonged” Francesca. A chat with the antique dealer confirmed the period and place of origin and ended with the dealer saying, “I wonder what the story is behind this cup?” Okay, okay, I said, wrap it. 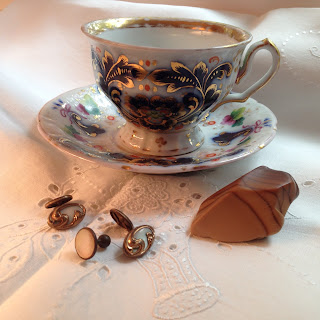 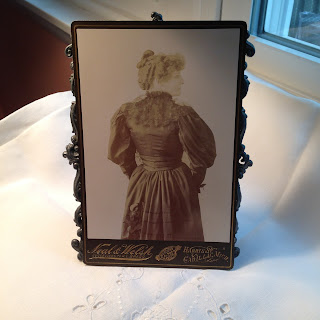 A good rummage through old jewelry unearthed treasures the characters would have recognized. A ring of my grandmother’s inspired the description of Francesca’s engagement ring. My grandfather’s mother-of-pearl collar button and cufflinks might have belonged to Connor. When my own desk drawer yielded a polished piece of Jasper, I knew this was something Connor could well have carried his pocket—a reminder of his days in the American West as a young man. Many of these items never found their way into Decorum, but their tangible presence helped me form a link with the past, a connection with something they may have known and touched, even if only in my imagination. On the other hand, my own very real feline companions Archie and Sammy wound up with cameo appearances, giving comfort to the animal-loving Francesca.

A terrific outlet for this accumulated information was in developing an 1890s tabloid called The O’Casey Chronicle for my website. The O’Casey Chronicle features articles about the off-camera activities of the characters and includes brief bio sketches as well as words of wisdom from “Miss Decorum” (http://www.kaarenchristopherson.com/the-ocasey-chronicle). Discovering as much as I could about Decorum’s cast of characters gave me the confidence to let them go, to let them do what came naturally to them in whatever circumstances they found themselves. They developed Decorum along with me, sometimes saying and doing outrageous things and taking the story in surprising directions. Was I ever tempted to rein them in? Not really. Left to themselves, they often displayed a greater facility in storytelling than I. The real wisdom lay in letting them get on with it. 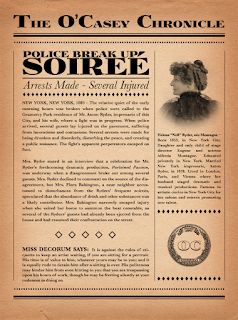