Blog Tour Review and Giveaway: Lady of the Eternal City by Kate Quinn

Title: Lady of the Eternal City
Author: Kate Quinn
Format: Paperback
Publisher: Berkley Trade
Publish Date: March 3, 2015
Source: I received a copy as part of the publisher's blog tour; however, this did not affect my review. 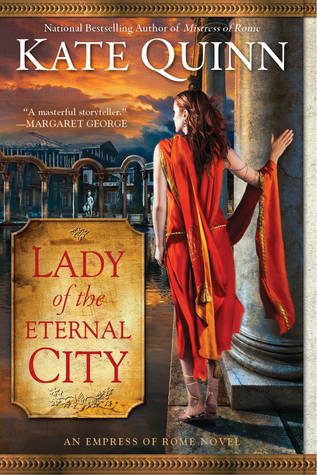 From Goodreads.com: "Elegant, secretive Sabina may be Empress of Rome, but she still stands poised on a knife’s edge. She must keep the peace between two deadly enemies: her husband Hadrian, Rome’s brilliant and sinister Emperor; and battered warrior Vix, who is her first love. But Sabina is guardian of a deadly secret: Vix’s beautiful son Antinous has become the Emperor’s latest obsession.

Empress and Emperor, father and son will spin in a deadly dance of passion, betrayal, conspiracy, and war. As tragedy sends Hadrian spiraling into madness, Vix and Sabina form a last desperate pact to save the Empire. But ultimately, the fate of Rome lies with an untried girl, a spirited redhead who may just be the next Lady of the Eternal City . . ."

"Lady of the Eternal City" is the fourth book in Kate Quinn's wonderful The Empress of Rome series. I feel like I have been waiting for this book for such a long time and let me tell you, it was well worth the wait! In "Lady of the Eternal City," the infamous Hadrian is finally emperor. For Quinn's characters, this does not necessarily mean good things. Hadrian's rule will bring many changes, both to Roman rule and in the personal lives of the character. Many of the beloved characters such as Sabina, Vix, and Titus are back in this book as well as many new characters, which I fell for quickly.

This book is the fourth book in the series and takes place about a year after the previous book. You could probably read this book as a stand alone book but you should not! For my fellow historical fiction lovers, this series is such a treat. Filled with memorable characters and exquisite historical detail, this book and the rest of the series will pull you in. You should really treat yourself and read the series from the beginning.

The characters are definitely a major draw for this book. I was very excited to go back to characters that I loved in the previous books. It was a treat to see what the likes of Vix, a former gladiator, and Sabina, who is married to Emperor Hadrian, were up to. We are also introduced to several more characters that really make for some fun reading. Quinn writes characters that you really begin to feel for and care about. So much happens to these characters and there are so many twists and turns that kept me on my toes (unfortunately, I cannot divulge them as I don't want to give anything away).

As with Quinn's other books, the world building is fantastic. Ancient Rome and her territories are pretty remote in many modern day readers' minds but through great writing and thorough historical detail, these places really come to life. The way that the detail is woven into the story is wonderful. This book is definitely a full body experience.

There are some books that take a long time to read because you are just not into the story. There are the good books that you read a normal pace. There are other books that you fly through because they are just so good. Then, there is a final category of books where you read the book incredibly slowly because you know with every page you turn, you are closer to the end and you know that you're going to have an overwhelming feeling of sadness when you get to the last page because it means that a fantastic story is coming to the end. This is definitely one of those books that fits firmly in the last category! I loved this book and am eagerly awaiting Quinn's next release. Want to read this fantastic book? Just fill out the Rafflecopter form below to win your very own copy (U.S. only).