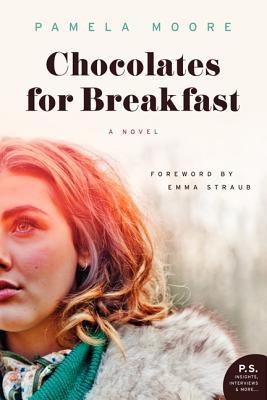 From Goodreads.com: "Considered America’s answer to the French sensation BONJOUR TRISTESSE (also published by Harper Perennial), CHOCOLATES FOR BREAKFAST follows Courtney Farrell, a classic disaffected, sexually precocious fifteen year old. Courtney splits her time between Manhattan, where her father works in publishing, and Los Angeles, where her mother is an aging actress. This wild coming-of-age story, scandalous in its day, is also the story of Courtney’s close and ultimately tragic friendship with her boarding school roommate Janet Parker."

"Chocolates for Breakfast" was originally released in the late-1950s. It is being re-released this summer by Harper Perennial(and with good reason).
This book both captures the time in which it was written but there are definitely some timeless qualities to this book. I think modern readers are going to find a lot to like about this book.

This book is a coming of age story and definitely on the darker side. Courtney is only a teenager but she's pretty much alone in the world. Her family seems to substitute money for love. Courtney was one of those characters that I didn't exactly like but I felt really bad for. On one hand, I think she makes some pretty bad choices but you have to wonder if things would have not been different if Courtney had a little bit more support in her life. Even when Courtney messed up or got involved with things and people she shouldn't have, I just wanted to give her a hug. She's definitely a character that you find yourself caring about.

In this book, we are thrust into the world of the super rich in New York and California. Moore makes you feel like you're in this world. You can picture what "martinis at eleven and breakfast at twelve" must have been like. Moore gives a lot of good descriptions of the places and things that Courtney experiences.

It also bears mentioning that Moore was only 18 years old when this book was published. I'm always amazed and oh so happy when you hear about people who were published so young. Moore unfortunately met a very tragic end and I wonder what else she may have written had she lived.

Overall, this is a great, dark story.