Review: No Comfort for the Lost by Nancy Herriman

Title: No Comfort for the Lost
Author: Nancy Herriman
Format: Paperback
Publisher: NAL
Publish Date: August 4, 2015 (Yesterday!)
Source: I received a copy from the publisher; however, this did not affect my review. 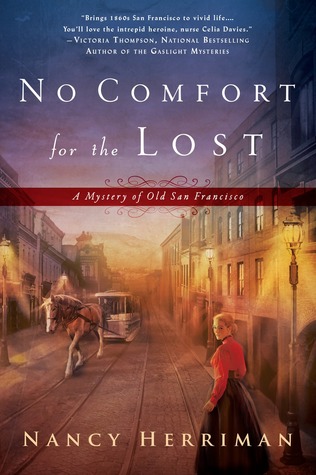 From Goodreads.com: "After serving as a nurse in the Crimea, British-born Celia Davies left her privileged family for an impulsive marriage to a handsome Irishman. Patrick brought her to San Francisco’s bustling shores but then disappeared and is now presumed dead.  Determined to carry on, Celia partnered with her half-Chinese cousin Barbara and her opinionated housekeeper Addie to open a free medical clinic for women who have nowhere else to turn. But Celia’s carefully constructed peace crumbles when one of her Chinese patients is found brutally murdered…and Celia’s hotheaded brother-in-law stands accused of the crime.

A veteran of America’s civil war, detective Nicholas Greaves is intent on discovering the killer of the girl, whose ethnicity and gender render her as powerless in death as they did in life. Nicholas’s efforts are complicated by Celia, who has a knack for walking into dangerous situations that may lead to answers…or get them both killed.  For as their inquiries take them from Chinatown’s squalid back alleys to the Barbary Coast’s violent shipping docks to the city’s gilded parlors, Celia and Nicholas begin to suspect that someone very close to them holds the key to a murderous conspiracy…"

"No Comfort for the Lost" is a historical mystery set in San Francisco during a time when there was a lot of racial tension between white people and Chinese people. There was a lot of distrust between the various groups that called San Francisco their home. Our heroine, Celia, knows that the Chinese need medical care so she uses her expertise to help where few of her race and sex venture to go. Celia finds herself trying to solve the murder of a Chinese woman that she cared for. If no one else will do it, she feels that it is up to her. Celia is definitely my kind of character! She is so independent and sharp! Alongside Nick, a detective, Celia will discover that nothing is ever clear cut and few things are the way you expect them to be!

I really like this book because there were so many twists and turns and it kept me guessing. I don't read a lot of mysteries but when I do I like for them to keep me on my toes and keep me second-guessing what I think is going on. This book did that from page to page. I had to keep reading with a sense of urgency because of the mystery at hand!

I also really liked the historical setting of the book. San Francisco is an incredibly interesting city with a lot of history. I like that the author took on the city it during a time where it was so greatly divided. The author uses a lot of good detail that drew me into the story and helped me to understand what the world was like for the characters. The city itself makes for a lot of interesting interactions with the various characters. Overall, I really enjoyed this book and would recommend it to those looking for great characters and a mystery that will keep you on your feet.