Review: The Unimaginable by Dina Silver 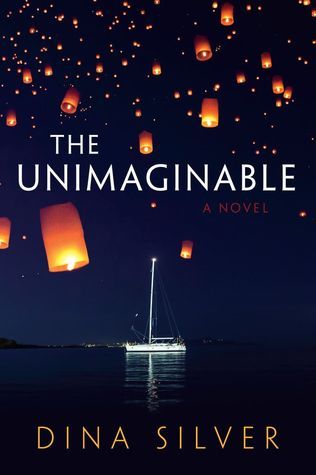 From Goodreads.com: "After twenty-eight years of playing by the rules, Jessica Gregory moves from her small Indiana town to Phuket, Thailand. But her newfound routine is upended with the arrival of Grant Flynn, a captivating, elusive man who is sailing around the world while trying to move on from a past tragedy. Jessica volunteers to help crew Grant’s boat, Imagine, on a passage across the Indian Ocean and finds herself falling in love with him as the voyage gets underway. But when disaster strikes, Jessica must summon her courage as the crew is confronted by unspeakable terrors—and, aboard a boat named for such promise, comes the unimaginable."

In "The Unimaginable," we meet Jessica, a schoolteacher who is sort of adrift. She wants to escape her old life and try something completely new so she moves to Thailand, where she quickly moves up the chain at a school and decides that she wants to go even further. She wants to see how far she can go and she ends up on a small boat with Grant, a guy who seems to be hiding from his own life. Together with Quinn, who works on the ship as well, they will encounter numerous dangers that neither one can imagine. This story has some romance and a lot of adventure!

It took me awhile to warm up to Jessica. She is just floating in the beginning of the book. She flits from here to there and we are led to believe that it is because she is trying to figure out her life. Some of her early actions in the book don't seem to add up, like why she leaves the school to post an ad to work on a boat but eventually we get to know her better once she gets on the boat. I did like the romance between her and Grant a lot though. It builds a lot and definitely gave me a lot to be entertained by.


The action in the book was good too. I really enjoyed seeing what happened to Jessica, Grant, and Quinn. The back of the book gives quite a bit away but there are still enough surprises in the book to keep readers on their toes. Overall, I liked the mix of romance and adventure in the book. I also really liked the exotic setting, which was another thing that kept me entertained.