Review: Both of Me by Jonathan Friesen 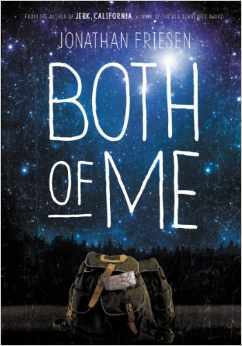 From Goodreads.com: "Elias Phinn has always been considered stupid, but that may be because no one knows his vacant exterior holds a gifted mind. A mind that has learned to focus on his created world of Warilia, through which Elias distills everything he sees in order to cope with the excruciating, actual world around him. But with each passing year, the detailed sketches and notebooks describing Warilia have not only taken over Elias's time, they have become a world he must slip into in order to get through each day. Clara Tobias has been running from her own reality, leaving behind her fragile mother and two siblings in order to have the whirlwind life of travel and adventure she always wanted. She justifies she put in her time caring for others, and that the rest of her life is hers to use as she pleases. Even if guilt won't leave her alone.
On a flight out of New York---Elias heading home for the summer, Clara on another trip to Somewhere---the two end up side by side. And when their carry-ons are mistakenly switched, Clara opens her bag to discover the histories of Warilia while Elias finds photographs and journals he uses to flesh out the mysterious girl who sat beside him, whom he sees as the beautiful daughter of a Warilian diplomat, making her and her mother an integral part of his entire world. When Clara arrives at the Phinn's boarding house for her luggage, she begs Elias to show her Warilia---and he does, taking her to locations that to him are not ordinary landscapes and buildings but epic mountains and massive skyscrapers. But as Clara finds herself further drawn to this intriguing boy, word comes her mother has died. When Elias becomes unable to deal with the death of his diplomat, he and Clara leave on a mission Elias claims will preserve Warilia forever. Though in the end it could be the one thing that allows Clara to piece her own world together."

"Both of Me" is the story of misfits. There is Elias, a teen who lives in two different worlds. One is the real world and the other is a world that was created from his own imagination where he gets stuck a lot of times and becomes an outcast for it. Clara is a young woman who is on the run from her past. Her family is utterly broken so she runs away from home and follows her father's extensive travel journal, which takes her to places she never could have imagined. When she And Elias meet, Claire feels a connection and knows that she wants to help Elias whether or not he wants her to. This is definitely a book that you have to play close attention to, especially as Elias moves in and out of his dream world. But if you pay attention, you will fall for these characters like I did!

I love when books can tell me stories that I've never heard of before and this story is definitely original. In this book, Elias has dissociative identity disorder or, which I had never read much about at all. I really like the author's treatment of the disorder and how Elias and those around him deal with it. Much of the book is about how the other characters come to understand his disorder as well as how Clara comes to understand Elias in spite of it.

I loved both of the characters of Clara and Elias. Both of them are dealing with a lot of different things from each other; however, at the same time they are also both dealing with not really understanding their place in the world. Clara has a lot of family issues. Her mother passed away. Her siblings don't seem to know how to take care of themselves and Clara is fed up with having to take care of them since it is such a thankless job that even her own siblings don't seem to appreciate. Her father has just returned from jail. Clara doesn't feel like there's anything for her in London anymore so she leaves to travel. It's only when she meets Elias that she thinks that she may have found a place where she can actually feel at home. I really liked reading about how these characters play it off of each other. On the surface they seem very different, but given a little bit of time it's easy to see how much they care for each other.

The writing of the book is a little difficult to get through at first. You have two main characters who don't always tell the truth. One of them is stuck in a dream world and the other one stretches the truth a little bit in order to save her feelings. Again as I said previously, this is a book that you definitely have to pay close attention to or you may miss out on something wonderful. I found myself reading a couple passages over again to make sure that I understood whether or not we were in Elias' dreamworld. But I didn't mind because the book was so engaging! Overall if you're looking for a young adult fiction book that is off the beaten path and like nothing you've read before, this would be a good pick for you.
Posted by Meg @ A Bookish Affair at 1:06 PM