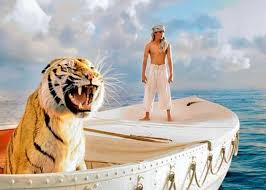 Experience the Stunning Cinematography on Blu-ray 3D With Over Two Hours of Bonus Material Including Deleted Scenes, Making Of Featurettes,
Inspirational Artwork and More

Believe the unbelievable.  Twentieth Century Fox Home Entertainment presents a groundbreaking cinematic experience you will have to see to believe when LIFE OF PI debuts on stunning Blu-ray 3D, Blu-ray and DVD from March 8 internationally and on March 12 in North America. Based on the acclaimed best-selling novel from Yann Martel that has been published in 40 languages, and brought to life by visionary Academy Award winning director Ang Lee (Brokeback Mountain, Crouching Tiger, Hidden Dragon), this magical adventure of hope, wonder, survival, and the power of the human spirit has been celebrated by critics all over the world.

A “magnificent and moving” (Peter Travers, Rolling Stone) motion picture event that has been hailed as “a masterpiece” (Betsy Sharkey, Los Angeles Times), taking in over $500 million in worldwide box office.  LIFE OF PI follows Pi Patel, a young man on a fateful voyage who, after a spectacular disaster, is marooned on a lifeboat with the only other survivor, a fearsome 450 lb Bengal Tiger named Richard Parker. Hurtled into an epic journey of adventure and discovery Pi and his majestic companion make an amazing and unexpected connection.

With incredible cinematography from Oscar nominee Claudio Miranda** (The Curious Case of
Benjamin Button, Tron: Legacy) and masterful performances from newcomer Suraj Sharma,
Irrfan Khan (The Amazing Spider-Man, Slumdog Millionaire), Rafe Spall (Prometheus, Anonymous) and Gerard Depardieu (Paris, je t’aime, City of Ghosts), the LIFE OF PI Blu-ray 3D is loaded with over two hours of behind-the-scenes special features, including deleted scenes that will make you rethink the story (also presented in 3D), five featurettes that dive into the making of the visual spectacle, 60 pieces of inspirational artwork, storyboards and more.  Prebook is February 13.

A “magnificent and moving” (Peter Travers, Rolling Stone) motion picture event that has been hailed as “a masterpiece” (Betsy Sharkey, Los Angeles Times), taking in over $500 million in worldwide box office. LIFE OF PI follows Pi Patel, a young man on a fateful voyage who, after a spectacular disaster, is marooned on a lifeboat with the only other survivor, a fearsome 450 lb Bengal Tiger named Richard Parker. Hurtled into an epic journey of adventure and discovery Pi and his majestic companion make an amazing and unexpected connection.

Life of Pi is a miraculous achievement in storytelling, inspired by a best-selling novel that many assumed was “unfilmable”. Ang Lee was a logical choice to direct, given his track record with literary adaptations such as Sense and Sensibility and Brokeback Mountain and in this feature we will look at how Lee took this bestseller and made it one of the most visually stunning and spiritually uplifting movies of recent years.

The film’s journey began with Yann Martel’s beloved book, one of the biggest publishing events of the past decade. The novel won the prestigious Man Booker Prize, and was a New York Times bestseller for over a year, so picking a director who could translate the source into a cinematic spectacle was essential.

Producer Gil Netter explained his choice by saying: “Ang Lee is an artist with whom I’ve long aspired to work, and is one of those magical talents who could masterfully take charge of the material.” Lee is well known for taking on ambitious projects and began working on Life of Pi four years ago. Yann Martel was very happy with Lee’s involvement; he recently said “Ang was the perfect choice because he makes emotionally powerful movies. His projects run the gamut from the small and the intimate to the spectacular.”

Watching his book being translated into film was a heady experience for Martel, who notes that “Life of Pi has been translated into forty-two languages. To see it translated on film as a movie is like the forty-third. The language of cinema is a universal one and to see the story translated that way is a thrill.”

One of the hardest parts of the film-making was creating Richard Parker, the Bengal tiger with which Pi shares his epic journey. For obvious safety reasons they could not film with a live tiger on the boat so Lee relied on visual effects supervisor Bill Westenhofer and his CG team to help create this fearsome character. The result of their hard work is clear for all to see and Richard Parker looks as real on-screen as the four actual Royal Bengal Tigers which were used as physical and performance references.

Casting the lead character, Pi, was another big decision for Lee. Surprisingly Suraj Sharma, a newcomer who had not even intended to audition, was cast in the role. Sharma summed up his experience by saying “I can’t even say how much I’ve gained from being in the film. Like Pi, I feel I experienced something remarkable – emotionally, physically, mentally, and spiritually.”

Life of Pi’s journey from book to screen was certainly not as easy one but after four years Lee brought audiences one of the most powerful films of 2012. When asked what he thought of his creation, Lee said, “Life of Pi, on a huge scale, is a fable of faith, in many ways, it is about the value of storytelling and the value of sharing stories.” Between Yann Martel’s novel and Ang Lee’s film the value of Life of Pi is hard to ignore, with both the mediums of the story touching millions across the globe.

Thanks to ThinkJam, you have a chance to win a copy of the Life of Pi Blu-Ray! (US only)

Email ThisBlogThis!Share to TwitterShare to FacebookShare to Pinterest
Labels: book to movie, giveaway