Today, I am very pleased to have Tinney S. Heath, author of A Thing Done here to A Bookish Affair. Thanks for stopping by, Tinney! 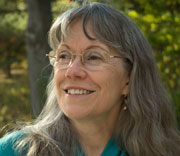 Lately I've been thinking about dialogue in historical fiction.

Should our characters speak in archaic language, to suggest the times they live in, or should we “translate” their words into language they might be using today? Do we risk being incomprehensible and sounding artificial, or do we take a chance on jarring our readers out of the story by sounding too modern, which is, after all, another kind of artificiality?

I suspect most writers find their comfort zone somewhere between the two extremes. Different readers, too, will have their different preferences. What draws one reader in will put another reader off.

I write about medieval Italy, so I'm automatically translating. Using the actual language my characters spoke is not an option. I tend to favor a more contemporary style (think Marcus Didius Falco, the breezy and street-smart detective in Lindsey Davis's wonderful series of mysteries set in imperial Rome), especially when my characters are talking in an informal situation.

I'll raise the formality to a higher level if a noble-born character is making a speech to a gathering of other nobles, and I'll take it right back down to contemporary casual (but not modern slang) if it's performers, servants, or lowlifes talking among themselves. A highborn character talking to a lowborn character? That will depend on his or her personality, and the situation.

For many years I belonged to a medieval reenactment society. Although we weren't known for overmuch emphasis on authenticity – imagine Vikings dancing English country dances with Italian Renaissance ladies, usually under a basketball hoop in a gym somewhere - people did like to do what we called “speaking forsoothly.”

For example, a medieval lady in an elaborate (but machine-washable) houppelande approaches a merchant in tunic and breeches. He has his merchandise set up on a folding table. She says, “Milord, I would right gladly purchase some of your wares, but alas, I have no more ducats [or shillings, or florins, or marks, or francs, depending on who she's pretending she is], for we didst stop on our way hither to procure viands from the Royal Purveyor of Forcemeat Patties. Canst accept recompense from Master Card instead?” He replies, “Aye, milady, and willingly. The good Master Card is always welcome here, as are Lady Visa and New World Express.”

It doesn't usually get quite that silly in novels, but it can come alarmingly close. And yet there are writers who employ hints of archaic language very effectively – a slight shift in word sequence, an old (but not impenetrable) word or phrase, a word pulled from a foreign language, its meaning clarified by context. And it can be wonderful. But the best of them do it a little, here and there, not in every sentence, every paragraph, every page. It's like writing dialect: a little goes a long way.

One of my pet peeves is the complete absence of contractions in a lot of historical fiction dialogue. It's as if our forebears hadn't been clever enough to figure out how to save themselves a few nanoseconds and elide their words. Yet if you study a medieval song text in the original language, or a poem, you're likely to find it bristling with apostrophes – elisions to make it scan, to make it sound the way people would have sung or said it. (This is one case where written language does provide us with valuable clues about spoken language, because both poetry and song are designed to be heard.)

I do think those of us who favor a more contemporary sound in dialogue need to weed out any blatantly anachronistic words or phrases. And I don't mean only current usages. In editing my book I realized I had used a phrase we usually think of as coined by Shakespeare (“the beast with two backs,” from Othello). I checked, and while a similar phrase does appear in Rabelais, that still only takes us back as far as 1532. It may sound archaic to a modern reader, but for my characters in 1216, it hasn't yet been said. It had to go.

And even though “trigger” does not necessarily imply a gun (you can trigger a trap, for example), I removed all mention of an event triggering a brawl, because to a modern reader a trigger suggests a gun, even if subconsciously. The thought of a gun will certainly jar someone out of a 13th century mindset.

Just as some authors get the first glimmer of their ideas in the form of mental pictures, my ideas come to me in their earliest form as snatches of dialogue. And the characters who speak to me in my head are speaking their dialogue the way I write it. To try to render it more “forsooth” would feel dishonest, and it would water down the impact of whatever those characters have told me as they struggle to come to life, in words that are both theirs and mine.

I'd like to thank Meg for hosting me on her great blog and giving me a chance to ruminate about dialogue in historical fiction.

I'm pleased to be able to give away a copy of A Thing Done. One lucky winner will win a copy of this great book (open to US only).

Monday, January 21
Review & Giveaway at Peeking Between the Pages

Wednesday, January 23
Review & Giveaway at A Chick Who Reads