GCB Give@way!!!: In Celebration of the New Show

Good Christian Bitches by Kim Gatlin has been adapted into a tv show starring Leslie Bibb and Kristin Chenoweth, one of my favorites! I've been really anxious to see this show. It first aired on Sunday, March 4, but I'm unfortunately out of town this week and haven't got a chance to watch yet. It looks so funny!!! 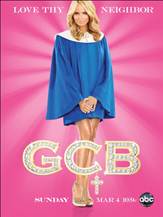 The GCBs of Hillside Park Presbyterian are praying for Amanda Vaughn--or so they claim. Will their evil gossip destroy her reputation, or will she show them exactly how to turn the other cheek?
Amanda Vaughn needs some heaven-sent help. She’s divorced her cheating husband and fled, along with her two teenagers, back to her hometown, Hillside Park, a Dallas suburb so upper-class that the question isn’t where to bank, but whose family owns the bank. Amanda is thrilled to be back in Texas—after twelve years in Southern California, she’s ready to leave behind her shallow, Godless life and return to the welcoming Christian world where she grow up. Or at least that’s the plan . . .
But when she arrives, she’s met with some Texas-sized trouble. Her old friends, neighbors, and fellow church members treat Amanda like a long-lost friend . . . until her back is turned. Then the claws come out. Amanda finds herself trapped in a world of salacious rumors, secret affairs, and Bible-study sessions gone terribly wrong. And what’s even more puzzling is that a secret admirer is sending Amanda lavish gifts. Why, she wonders, would anyone send a Mercedes when a simple dinner invitation would do?
Packed with schemes, drama, and a Southern setting more fun than a barbecue at Southfork, GOOD CHRISTIAN BITCHES has humor, sass, and an unforgettable cast of characters.
Read the first chapter here http://scr.bi/AkPl1w
About the Show
Official website          http://abc.go.com/shows/gcb
Facebook                    http://www.facebook.com/GCB
Twitter                        https://twitter.com/#!/gcb  #GCB
Show Details
Tune-In                        Sundays at 10/9c
Genre                           Comedy
Network                       ABC
Starring                        Leslie Bibb, Kristin Chenoweth, Annie Potts, Jennifer Aspen, Miriam Shor
Twenty years ago, Amanda Vaughn was the queen bee of Dallas, Texas. Now she’s back, and it’s payback for being an original mean girl. Will the good women of her hometown welcome her with open arms, or preach the golden rule while stabbing her in the back?
Everything's bigger in Texas… even the drama.


Send a GCB e-card
Let your friends (or frenemies) know exactly how you feel -- send 'em a GCB-inspired e-card from Someecards.com! http://www.someecards.com/gcb-cards/most-sent-today 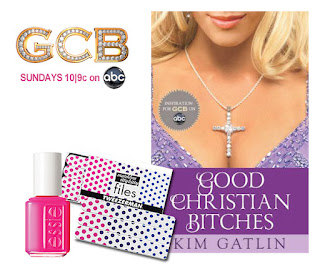 Just fill out the form below!