Book to Movie: The Descendants by Kaui Hart Hemmings

The Descendants starring George Clooney was up for a bunch of Oscars this year. Set in Hawaii, it has a lovely setting and a great cast but did you know that it was originally a book???
About the Movie:
From director Alexander Payne creator of the Oscar® winning Sideways comes one of the Best Pictures of the year, THE DESCENDANTS, featuring a stunning cast including Best Actor nominee George Clooney (Ides of March) and Shailene Woodley (The Secret Life of the American Teenager) in her Golden Globe nominated and Independent Spirit Award winning role. Take home this wonderfully warm and witty film and go behind the scenes of THE DESCENDANTS with all-new exclusive content on Blu-ray Disc Combo Pack and DVD March 13 from Fox Searchlight and Twentieth Century Fox Home Entertainment.

Based on the best-selling novel by Kaui Hart Hemmings and set in Hawaii, THE DESCENDANTS is a sometimes humorous, sometimes tragic journey for Matt King (George Clooney) an indifferent husband and father of two girls, who is forced to re-examine his past and embrace his future when his wife suffers a boating accident off of Waikiki.  The event leads to a rapprochement with his young daughters while Matt wrestles with a decision to sell the family’s land handed down from Hawaiian royalty and missionaries.
About the Author: 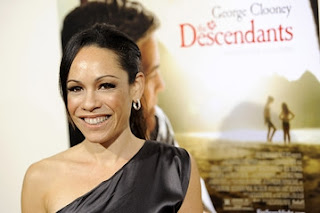 From the author's website: "Kaui grew up in Hawaii and has degrees from Colorado College and Sarah Lawrence College. A former Wallace Stegner fellow, she now lives in Hawaii. House of Thieves is her collection of stories. The Descendants is her first novel."
Check out the study guide and come back on March 16th (Friday) for a special giveaway celebrating The Descendants: 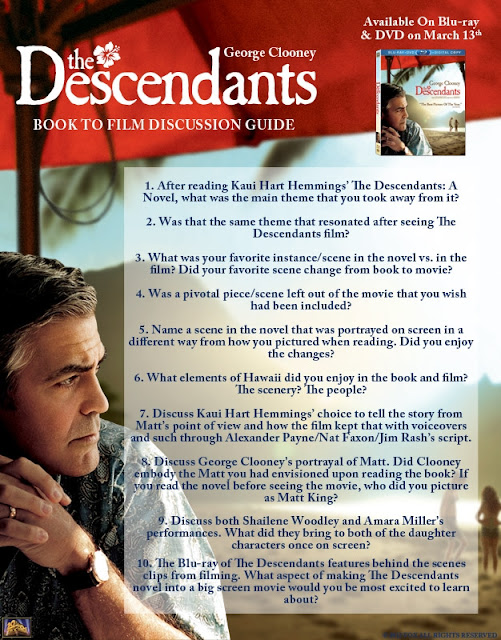 Who saw The Descendants? What did you think?
Posted by Meg @ A Bookish Affair at 6:00 AM

Email ThisBlogThis!Share to TwitterShare to FacebookShare to Pinterest
Labels: book to movie