I am so very pleased to welcome Jessica Lauryn here to A Bookish Affair today. Jessica is the author of "A Sultry Performance," which I reviewed here yesterday. 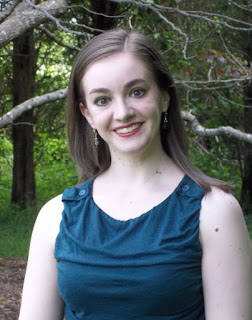 1.   What inspired you to write "A Sultry Performance?"
I drew on a number of different elements for A Sultry Performance, several of which come back to the same idea. Heroine Victoria Morrow was forced to become an exotic dancer as a young woman, as a means to survive. As someone who has always had the support of a loving family, I’m greatly inspired by women like Victoria, who may not have been as lucky as I was and yet manage, through their strength and determination, to find true love in spite of the odds. I wrote this Cinderella-style romance because I believe everyone can have their happily ever after, and even the most challenging of road-blocks can’t keep us from achieving it, when we’re determined enough.
Hero Chris Gordon, whose wife, Evelyn, was murdered by a hit and run driver, is determined to get justice. He’s recently learned that Evelyn was having an affair and he suspects the man she was involved with, Oakley Sutherland, is her killer. He ignites a plan to ensnare Oakley, working through Oakley’s fiancée and the leader of the exotic dancing team at his night club, Victoria Morrow.  Of course, I wanted to write this story because it contains so much juicy conflict! But more so, like Victoria, Chris has gone through something unimaginable and he still manages to find happiness under the most unlikely of circumstances. Though I’m fortunate to have never gone through anything nearly so horrific, I find it encouraging to create a character who can beat the odds and find love for the 2nd time. I was drawn to the setting of the exotic night club where the story is primarily set, Sultry & Sensational, as I’ve led a rather clean-cut life but have often wondered how the other half lives, so to speak.
2.    What drew you to setting your story in the Rabourn Theater?
Though A Sultry Performance contains a number of scenes which take place at Sultry & Sensational, it is indeed a part of the Rabourn Theater Series, and everything in this series always leads back to Rabourn Theater. I was drawn to the idea of creating a series about a theater by my love of Phantom of the Opera. I love how the mysterious phantom, who is thought to be so unattractive on the outside, becomes obsessed with something beautiful (opera, theater) and it is his obsession which ultimately drives him to madness. I created Augustus Nathanson, the main villain in the Rabourn Theater Series, with the intention of exploring this idea further, showing all of the mayhem which may come as the result of one man’s actions and how, in the case of this series, it deeply affects the lives of 5 would-be couples, who find love in spite of every odd. All of the couples are connected to Rabourn Theater in some way and this beautiful, romantic setting plays a major part in all of their stories.
3.    Who is your favorite character in the book?
My villains are often my favorite characters, especially so because I’m often preparing to reform them in an upcoming story. But in this case, I’d have to say that my favorite character is Victoria. I’m being a bit redundant perhaps, but I really do admire the way that she holds herself together while being under the thumb of an abusive man, and the collateral damage of another, something she isn’t even aware of.  Though Chris attempts to play the role of the savvy seducer where she’s concerned, Victoria isn’t having it, and their witty banter makes me laugh out loud, even though I wrote it and have read it over about a million times. I’d like to think that I’d possess Victoria’s same strength if I were in her shoes and though our lives could not be more different, I do believe she contains some part of me, as all of my characters probably do.
4.    What was your indie-publishing experience like for this book? What made you decide to go that route?
Having published my first 7 novels with Siren BookStrand, I thought it might be fun to try something different. I worked with Killion Group to publish A Sultry Performance, and they were amazing. I’m big on small details when it comes to the appearance of my books and I was blown away by all of the little touches they provided me with, a cover of my choosing, a step-back image, (something I’d never had before) and beautiful font heading my chapters and throughout the book. Their design was so in-line with my own desires. They really did a nice job!
5.    If you could bring three people to a deserted island, who would you bring and why?
It would be difficult for me to live on a desert island, as I’ve become something of a social butterfly, but I would bring my mother, who is my best friend and favorite person to watch the soaps with, my father, who is my mentor and business partner in my day-job and my fiancé Bill who’d have us all laughing day in and day out even if we never returned from that island!

A Sultry Performance Blurb:
Chris Gordon, stage manager at Rabourn Theater, suspects his late wife’s hit-and-run was never an accident. He believes the man she was having an affair with, Oakley Sutherland, was responsible and he vows to get Evelyn justice, igniting a plot to ensnare Oakley, working through Oakley’s fiancée, Victoria.


A well-known exotic dancer by night, Victoria Morrow has been fighting to make a better life for herself, and she won’t be taken advantage of. But when the most handsome man at Rabourn Theater takes an interest in her, she finds herself spiraling down a path she never expected to. Can Victoria resist Chris’s charms? Or will both of them fall prey to the danger that lurks in the wings?

Excerpt:
“I’m fine.” Victoria hid her eyes.
Chris tucked a disheveled wave behind her ear. “You don’t look fine. You’re trembling, and you look as though you’ve been crying.”
Victoria did her best to hold it together, like she always did. But seeing the compassion in Chris’s eyes, compassion that ran deeper than anything she had ever been on the receiving end of, the emotions welled inside of her. As the tears spilled down her face Chris took her into his arms. His strength surrounded her. He brought her inside of it, brushing one strong hand up and down her back.
“Victoria,” he whispered, “why are you marrying that man?”
Victoria tried, but couldn’t think of a single reason why she was. For years, she’d been telling herself that she was humoring Oakley, biding her time with him until she could approach him from a position of power. But the more time passed, the more she questioned whether that day would ever come. The night Oakley had asked her to marry him, there hadn’t been any question in her mind that she was going to say yes. Such had been the way of their disgusting farce of a relationship. She presented a hard-edged front to the world, but when it came to the man who’d been manipulating her for half her life, it was as though she had no power at all, as though she might just as well be nothing more than a mouse.
Avoiding Chris’s eyes, because she couldn’t possibly hide the truth from him if they were looking at each other head-on, Victoria simply said, “I love him.”
Chris’s arms stiffened and Victoria froze in turn, barely breathing as he took her by the shoulders, saying, “Victoria, that man just embarrassed you in front of two hundred people. He berated you, he manhandled you and he exploits you every night of your life. How could you possibly love a man like that?”
Victoria gnawed her lip, completely at a loss for words. She had no defense for the man in question and by aligning herself with him she was sacrificing more of her identity every day. Not that the life she’d led had made her crazy about relationships in general, but she wasn’t even opening herself to the possibility of another man’s companionship, to his soothing words and soft touch. Was it so wrong to want these things, so impossible to have them? Bringing Chris into the middle of her relationship with Oakley was liable to prove dangerous for both of them. But Chris was strong. He had to be, to have survived the loss he had.
Cautioning herself not to allow her thoughts to get away from her, knowing that Oakley would probably kill a man he perceived to be a serious enough threat to him, Victoria lifted her chin. “I know what it looks like, but I couldn’t count the things Oakley has done for me over the years. He’s protected me, and I sleep soundly at night knowing that no one is going to hurt me. He makes me feel safe.”
She realized right away that she shouldn’t have put things in those terms because the twinkle in Chris’s eyes told her exactly what his reply was going to be. She ought to run. He was giving her a chance to do just that, but her legs refused to stand. Instead, they eased sideways, leading the way like the smokestack on a train as her body leaned helplessly into that of the man sitting beside her.
“Tell me, Victoria—” Chris looked into her eyes, “does Oakley Sutherland make you feel like this?”

Bio:
#1 BookStrand bestselling author Jessica Lauryn has been writing since before she could hold a pen. Her days of storytelling through the art of playing with dolls inspired her to write romantic suspense novels The Romance Reviews describe as having "Just the right amount of passion and romance!" Villains often reform in Jessica's stories, and just may become heroes themselves! Jessica is an avid antique collector, as well as a proud member of Romance Writers of America and her local chapter, New Jersey Romance Writers.