I am so very thrilled to welcome Tiffany McDaniel, author of "The Summer that Melted Everything," here to A Bookish Affair today! 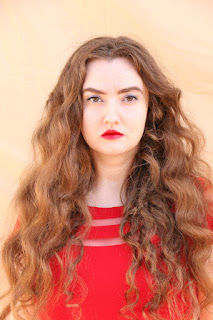 Tell us a little bit about "The Summer That Melted Everything."
The Summer that Melted Everything is about an eighty-four-year-old man named Fielding Bliss, who is looking back on his life during one summer in 1984 when he was thirteen-years-old and his father, Autopsy Bliss, invited the devil to their small town called as Breathed, Ohio.  Who answers the invitation ends up being a thirteen-year-old boy in overalls and bruises.  This boy calls himself Sal, a combination of Satan and Lucifer.  Sal’s arrival comes the first day of a hell-hot heat-wave that carries through the entire course of the summer.  This is not just a story about the heat, but a story of everything that melted in that heat.  Family, friendship, innocence, and even lives.  Puddles of all of these things melted down.  That is what this story is.  A man trying to survive ferrying these puddles, which to him have become oceans he must cross to once again find the bliss of his name.
What drew you to writing this story?
This novel started out as a title.  It’s origin being one hot summer day in Ohio, where I felt like I was melting into a puddle of myself.  I always began a new story with the title and the first line and from there everything falls into place.  The characters become who they are meant to be.  The story carries through to its natural end.  I’m always drawn to the story itself.  Like a moth to the flame that is my laptop, waiting to type, type, until I have done right by these characters and their story, which really is their own.
Who is your favorite character in this book and why?
I always hesitate to say my favorite character.  But I will say one of my favorite characters to write was Grand.  He is Fielding’s older brother and really Grand is the older brother we all want.  The one who protects us and guides us through the fog of our own lives.  Seen through Fielding’s eyes, Grand is purposely pristine.  And yet his struggles are universal to us all.  Grand was a character I thought about longer than the others.  He journeys through the story almost like a ribbon flying in the wind.  And one day he gets caught in the branches of the highest tree where we can’t reach him.  Sometimes he felt like that to me.  Unreachable.  And in the end, he proved that way to Fielding as well.
Can you tell us about your favorite scene in the book?
I have several favorite scenes.  One of my favorites is when Fielding and Sal meet for the first-time.  Sal is introducing himself as the devil, but their meeting really comes down to two boys meeting for the first-time in the summer-time and there’s an immense sweetness to their coming together.  Even though it’s the beginning of a lot of terrible things to come their way, it is also the beginning of their friendship and very much so, the beginning of them being brothers.
If you could bring three people (dead, alive, or fictional) with you to a deserted island, who would you bring and why?

There are so many people I could bring.  I think my answer will probably change every time I answer this.  But answering now, I’d say I’d bring along Michael Keaton as Beetlejuice.  That character has stuck with me ever since I saw the movie as a kid and I haven’t stopped wanting to hang out with Beetlejuice and eat Zagnut bars with him.  Ever since that movie I’ve also always wanted my very own copy of Handbook for the Recently Deceased, and maybe Beetlejuice will bring a copy along to the desert island with him.   My second person would be Ray Bradbury so he can tell me about Martians and Dandelion Wine and the way paper burns at 451 degrees Fahrenheit.  Perhaps the two of us would go around and carve stories in the trunks of all the palm trees like I imagine writers on a desert island would do.  And lastly, I’d bring with me Sal from The Summer that Melted Everything.  So he can tell me again what it’s like to be fallen here from the sky, like the prince he is.
Posted by Meg @ A Bookish Affair at 4:00 AM