Author Interview: Jen Kirkman, Author of "I Know What I'm Doing and Other Lies I Tell Myself"


She's also doing a show in D.C. on Saturday if you're in the area! 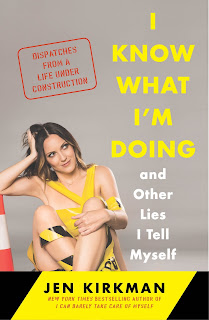 I get tripped up on the word “inspiration” because I feel like I’m saying I was sitting around one day and thought, “Eureka! I’ve got it!” and then invented electricity.  The basic boring fact is that I have already written one book and one thing I always knew is that I wanted to be an author - and I still do and would love to keep writing books every few years.  So book number two was something I was hoping for even while writing book number one.  And since I’m less inspired than say J.K. Rowling who creates entire fictional worlds - I’m a non-fiction personal story kind of author.  My inspiration will always be what’s going on in my life.  But I try to pick stories to tell that other people can relate to.  Maybe my reason is so that people feel less alone which in turn validates my experience? I think that while there are plenty of books that tackle divorce, I wanted to write my story about leaving a marriage and not trying to figure out why it ended (because we both knew) but why we even went as far as to get married - the answer is because you’re “supposed to” - and that’s sort of where the book goes from there.  What else are we “supposed to do” that we do without thinking and then realize later we made a mistake?

The travel chapters are my favorite part of the book. I used to suffer from panic disorder - and flying or even being in another country alone was something I never imagined that I would eventually do with ease.  And when I’m in other countries I’m a different person.  I’m more open.  I talk to strangers and sight-see and as a result, usually some bizarre or special experiences ensue. And I loved writing about insulting the entire city of Dublin, having a bonding moment and then a fight with a guy on a flight to Melbourne, spending my 40th birthday on a terrible blind date in Sweden and dozing off, and falling out of my seat into the aisle at a play in London.

3.      This is your second book! What makes this one different than the first book?

Different stories? I mean that’s the obvious answer and I bet you already knew that! This book is different because unlike my first book which was really about one thing - the reactions I get from society about not having children - this book covers many decades of my life - and there’s something in it for everyone - whether someone wants to read about marriage, families, living alone, turning 40, going on a sting operation in NYC, dealing with a nosy orthodontist, going for my career dreams and how I got through disappointments.

4.      You'll be appearing at Sixth and I in D.C. this Saturday, April 16th. What can people expect when they come to see your show?

This show is something I am really proud of. I just did a two week run of it in Melbourne Australia and people loved it! I am telling six short stories about times in my life when I really thought “I knew what I was doing,” but I was totally being an idiot. The stories are different from my stand-up, so it’s a different show than people who saw me at Sixth & I last year or saw my Netflix special.  This is definitely more of a “show” and it’s that kind of cringe-worthy humor that I love doing - cringe-ing because you’re thinking, “Ohhhh, ouch I’ve done that.” I talk about failing at a talent show as a kid, being in NYC on 9/11, but being more caught up in a love triangle that day, the time I thought I was just going to be James Dean for a while, and lots of other random ridiculous stories.  I’ll also read a small excerpt from a chapter of my book and I’ll do a short Q&A after the show. Then a local bookstore will be selling books at the venue and I’ll sign and take pictures after! It’s going to be a really great unique event.

I think people should come because if they are fans of mine - this is how I make my living.  If they just stay home and think about me - that doesn’t help. And this show is unlike anything I’ve ever traveled with before. It’s a different style of performing than people have seen me do and there will be a LOT of opportunity to interact from the live Q&A to the book signing after.

Of course! You need to fire your research department! I have performed in D.C. countless times in my many many years as a touring comedian. It’s one of my favorite stops. I go every year. I was just at Sixth & I last year. When I’m on tour I save all of my energy for the show. It’s all about the work for me and if I sightsee, I’m really stretching myself too thin during the day. I have to give my all to the show and I would rather just rest and then have the first people I see all day be the audience - that way I’m SO excited to perform. You don’t want a comic who has been out all day sightseeing and living it up - they don’t have the same energy. That being said - about 8 years ago I came to D.C. as part of a festival and I only had five or ten minute comedy spots every night so I did sightsee and the comedians got a lot of special treatment. I got to stand on Nancy Pelosi’s balcony and look out. She wasn’t there and the tour guide probably shouldn’t have let me do that.

7.      If you could bring three fictional characters or historical figures with you to a deserted island, who would you bring and why?

This answer will probably be what I would say today, but I bet if you asked me this again next week it would change again.

Okay. Why wouldn’t I bring Jesus? I would want to ask him - were you even real? And if so - what do you think about the people that are into you? And come on, you know there were female apostles, but they were written out of the Bible - tell me about them?

I would bring David Bowie because I’ve always had a crush on him and he could sing to me and wear fantastic outfits that he makes out of palm trees.

And I would bring Oney Judge.  She’s someone I discussed in my very first Drunk History episode.  She was a slave of George Washington who escaped.  I would want to hear her stories of being kept by the president and she would be the savviest person with us - in case we needed to get off of that island.