Title: A Blazing Gilded Age
Author: Rich DiSilvio
Format: Paperback
Publisher: DV Books
Publish Date: May 2012
Source: I received a copy from the author; however, this did not affect my review. 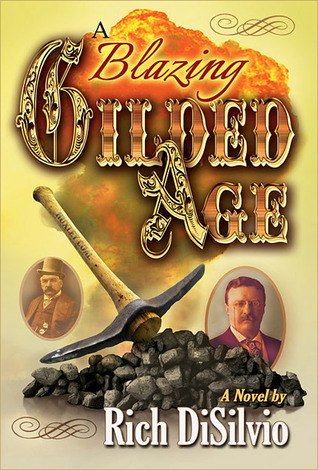 From Goodreads.com: "A Blazing Gilded Age is the epic story of a volatile nation burning with ambition, yet bleeding with injustice. It was a time of profound change; boldly transforming from an agrarian backwater into an industrial powerhouse.

Center stage in this turbulent saga, are the Wozniaks; a poor coal mining family struggling to achieve the elusive American dream. Confronted by the evil ways of their ruthless and depraved boss, Archibald Desmond Huxley, the Wozniak family is thrust into utter turmoil, thus igniting a blazing journey of revenge and survival.

During the Wozniaks’ quest, the lavish lifestyle of Huxley and his fellow titans, including J.P. Morgan, Carnegie, Vanderbilt, Teddy Roosevelt, Mark Twain and others, are woven into the story line, thus painting a broad and vivid canvas of 19th century America. Springing to life are legendary figures and historic events that accurately depict an era boiling with bravado, innovation and astounding progress, yet blistering with corporate greed, class warfare, and political corruption. After many unexpected twists of fate (some fortuitous and others heartbreaking), the Wozniaks emerge victorious, thus finally achieving the American dream, yet not without scars."

"A Blazing Gilded Age" is a fascinating look at the United States through the eyes of the Wozniak's, a family that is just trying to make a better life for themselves in the Pennsylvania coal mines. The late 1800s and early 1900s were a really interesting time in America. The world was changing incredibly quickly. This book features some of the big names of the times including one of my favorites, Teddy Roosevelt. This is a good story about the American dream.

I love a good family story and this book definitely fits the bill. The Wozniaks definitely struggle throughout the book. American society is no easy place for an immigrant family during that time period. I liked the sons. I thought the author did a good job of making the Wozniak children feel very different. They each had very different personalities. My favorite character in this book was probably the mother of the family, Sophia. I love strong characters and she is definitely one. She had a lot of courage and a lot of guts even when things looked really bad for her and her family.

The writing in the book was ok. It was a little choppy and there were places where I thought it could be streamlined a little bit. There were some places where the characters told a little bit more than they needed to, which bogged down the story somewhat but overall, the writing felt quite promising.
Posted by Meg @ A Bookish Affair at 4:00 AM