The Final Sacrament Spotlight and Giveaway 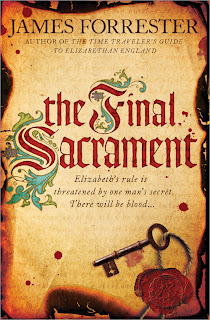 
“For twists and turns, codes and clues, Mr. Forrester beats Dan Brown, and when it comes to social detail, he is up there with Patricia Finney” – The Wall Street Journal
“A winner for any reader who loves historical, action-packed novels.” —Kirkus Reviews (STARRED)
“James Forrester captures the sights, smells, and dangers of Tudor England and tells a gripping story.” —Philippa Gregory, author of The Other Boleyn Girl


To celebrate the last chapter in the series, look for opportunities to win a print copy of The Final Sacrament every day this week, with bloggers around the book blogging community!

1566. William Harley, Clarenceux King of Arms, has risked his life to protect a secret document, one which could endanger Queen Elizabeth’s legitimacy on the throne. But when his family goes missing, Clarenceux is put to the test. Will he abandon queen and country to save the ones he loves, or sacrifice everything to keep the country from plunging into civil war?

James Forrester is the pen name of acclaimed British historian Ian Mortimer, author of nonfiction works including The Time Traveler's Guide to Medieval England (a Sunday Times bestseller). He was elected a Fellow of the Royal Historical Society in 1998, and was awarded the Alexander Prize (2004) by the Royal Historical Society for his work on the social history of medicine. www.jamesforrester.co.uk

Want to win a copy? Thanks to the publisher, Sourcebooks, I can give away a copy of this book. Just fill out the Rafflecopter form below (US/CAN only)!