Today I am very excited to have Elizabeth Loupas here at A Bookish Affair! 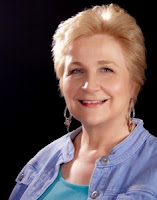 I don’t think about “theme” when I’m actually writing—I’m too immersed in the story and the characters and what happens next. After the fact, though, I can see there are ideas that recur when I write things. One of the most important of them is the concept of home—losing a home, finding a home, regaining a home, protecting a home, living one’s life in one’s right place.

In The Flower Reader, home is Granmuir, Rinette’s ancestral castle. It’s a physical place, an actual building. (Well, a collection of buildings, as all medieval castles were, and although The Flower Reader actually takes place in the sixteenth century, Granmuir is already old and definitely medieval in style and feel.) Rinette loves it fiercely and is willing to take huge risks and undergo terrible suffering to protect it. That’s one sort of home, the home one is born to and clings to all one’s life.

Other homes are less material. In The Second Duchess, Barbara’s home is what she at one point describes as her “cloud cuckoo-land”—a place she read about in a book, more a castle in the air than a real castle made of stone. She doesn’t find quite the cloud cuckoo-land she’d hoped for, but she does find an intellectual and emotional and spiritual home in the end.

I’m still only at the beginning of my new book, The Alchemist Prince (or at least that’s its working title), but already the same pattern is emerging. My characters either have no homes, or are displaced from their homes, or think they have their homes well under their control when they really don’t. Some will find their right homes in the end, and those will be the happy endings. Others will lose their homes— lose everything. And still others will find new places that might be called “home,” where they very least expect them.

I’ve spent most of my adult life moving around from city to city, and I suspect that’s why the concept of “home” is so important to me. I dream endlessly about big old houses, never the same one twice. I’ve always wished for a single physical place, a place where my parents and grandparents and great- grandparents lived, like Rinette’s beloved Granmuir. Perhaps it’s an emotional echo left over from a previous life. That’s one of the joys of writing—you can simply create the places where your heart longs to rest.
What does “home” mean to you?

Elizabeth, I would also love to have a grand, old house with lots of history to call 'home' as well! Thanks for being here!


Tuesday, April 3rd
Review at Confessions of an Avid Reader

Thursday, April 19th
Review at So Many Books, So Little Time

Friday, April 20th
Review at The True Book Addict
Author Guest Post & Giveaway at Passages to the Past

Tuesday, April 24th
Review at Always with a Book

Thursday, April 26th
Review at A Novel Affair
Author Guest Post at Always with a Book

Friday, April 27th
Review & Giveaway at Peeking Between the Pages

Monday, April 30th
Review at Reflections of a Book Addict

Tuesday, May 1st
Review at A Bookish Affair

Wednesday, May 2nd
Review & Giveaway at The Broke and the Bookish

Thursday, May 3rd
Review at Reviews by Molly

Friday, May 4th
Author Guest Post at A Bookish Affair

Monday, May 14th
Review at Bloggin' 'Bout Books
Review at Paperback Princess
Review at The Daily Bookmark
Posted by Meg @ A Bookish Affair at 6:00 AM