I am very excited to welcome Dana Stabenow here to A Bookish Affair! She is the author of "Silk and Song," which I really enjoyed! Check out my review here!


Silk and Song is the story of Marco Polo's granddaughter, Johanna, traveling the Silk Road west from China to England during the years of 1322-1327, picking up strays and making enemies along the way and ending by helping a king to his throne. Before it's a romance (although it is that), before it's history (although it's that, too), Silk and Song is a road trip. Think Route 66, with camels instead of a Corvette. Speaking of which... 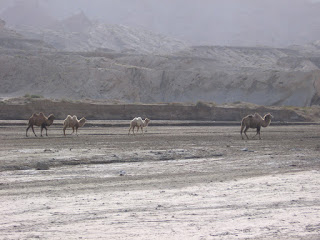 One day, I think it was outside Kuche, or maybe Kashgar, we called for a pit stop. Our driver pulled over at the side of this dry riverbed and we all got out and looked for a convenient boulder. I was crouched on the edge of this dry river bed, trying not to pee on my pants, when movement caught the corner of my eye. I looked up to see this herd of camels stroll by. Camels are pretty much responsible for the central Asian trade routes developed in 8th century B.C. The wheel had been long in evidence by then, of course, but there were no roads to support wheeled vehicles. Behold the camel, specifically the Bactrian or two-humped camel. Its thick coat insulated it from extreme temperatures, it could go forever on a pint of water, it was sure-footed on unmaintained trails in mountain and desert, and a single Bactrian camel could carry up to 500 pounds. So, yeah, Johanna rides North Wind most of the way, but the camel carried the freight that bought his feed. 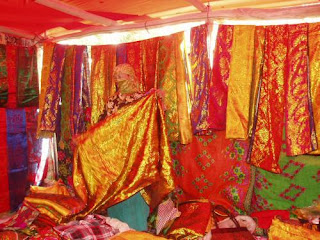 The silk in Silk Road and, yes, those silks are as blinding to the eye as they are to the camera. As she was displaying her wares to us, the muzzein sounded the call to prayer. She held up a hand, laid aside her silks, got out her prayer rug, and knelt facing east to do her prayers. After which, she rose back to her feet, folded her rug and put it away, and resumed business as usual. I thought of her when I wrote the market scene in Kashgar. 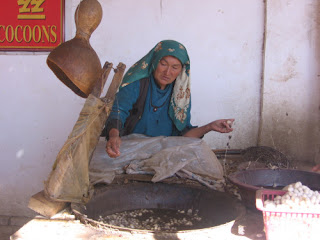 And speaking of silk, those are silk cocoons, spun by silk worms who have fed long and well on mulberry leaves. There is a fire beneath the caldron, and this lady is boiling them in water to make the very end of the strands loosen, all the while stirring the water so that the strand ends will adhere to the stirring stick. The ends are attached to a spindle and wound, and voila, ready to dye and weave. Now of course they have gigantic automated factories to do this work, but this is the way they would have done it back in Johanna’s day. 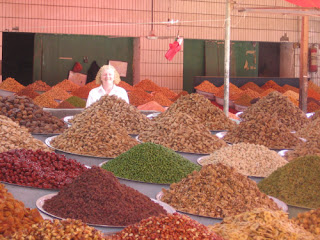 Me among the fruit and nuts at the market in Yarkent. (Avoid the obvious comment.) I love markets, supermarkets, farmers markets, street fairs. Markets are where you see what people are making and buying and selling. People are talking and laughing and shouting out prices and exchanging sotto voce comments with each other on how much they got for that carpet and those chairs and commiserating over the fluctuating price of a glass of pomegranate juice. There’s a guy making rivets from snippets of soft tin, right across the street from another guy shoeing a donkey, right next to a dentist’s office where you can stand in the doorway and watch the him extract a tooth. Markets are where you see how the people in that place in that time really live their lives. It's no accident that Silk and Song is a road trip interrupted by markets from Kashgar to Venice to Chartres to Ludlow.
About the Author:

Dana Stabenow is the author of 33 novels, including the Edgar-award winning Kate Shugak series. She lives in Homer, Alaska. 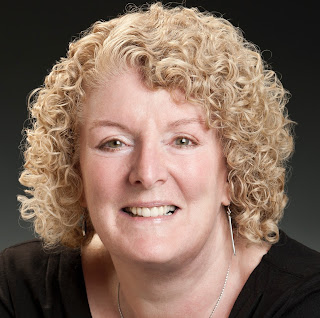 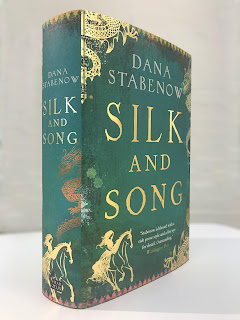