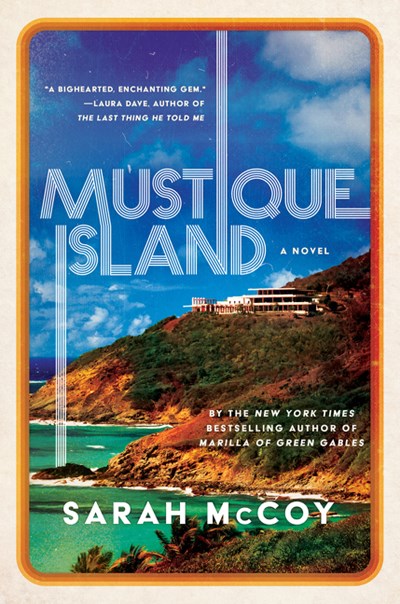 From Goodreads.com: "It’s January 1972 but the sun is white hot when Willy May Michael’s boat first kisses the dock of Mustique Isle. Tucked into the southernmost curve of the Caribbean, Mustique is a private island that has become a haven for the wealthy and privileged. Its owner is the eccentric British playboy Colin Tennant, who is determined to turn this speck of white sand into a luxurious neo-colonial retreat for his rich friends and into a royal court in exile for the Queen’s rebellious sister, Princess Margaret—one where Her Royal Highness can skinny dip, party, and entertain lovers away from the public eye.

Willy May, a former beauty queen from Texas—who is also no stranger to marital scandals—seeks out Mustique for its peaceful isolation. Determined to rebuild her life and her relationships with her two daughters, Hilly, a model, and Joanne, a musician, she constructs a fanciful white beach house across the island from Princess Margaret—and finds herself pulled into the island’s inner circle of aristocrats, rock stars, and hangers-on.When Willy May’s daughters arrive, they discover that beneath its veneer of decadence, Mustique has a dark side, and like sand caught in the undertow, their mother-daughter story will shift and resettle in ways they never could have imagined."
My Two Cents:
Mustique Island: even just saying the name feels opulent! Back in the 1970s, the island was not as well known as it is now, making it the perfect place for the likes of Princess Margaret and Mick and Bianca Jagger to hide away from prying eyes. Willy May is not famous like that trio but she is still looking for a place to hide and perhaps lick her wounds after a devastating separation. This book pairs well with a lovely spot on the beach and a drink with a little paper umbrella.
Posted by Meg @ A Bookish Affair at 4:00 AM