I am very excited to welcome Christy English here to A Bookish Affair today! 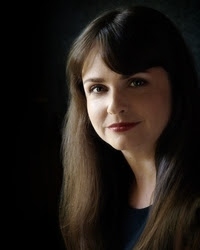 I had a dream that showed me the first fifty pages, and I was hooked. I knew that I had to find out more about the mysterious immortal woman living in modern Boston, with powerful ex-lovers and men hunting her down. I had to write the book to discover who Aphrodite was, and I think I just scratched the surface. That is what is amazing about the characters who come to us...they reveal what they want to reveal at their own pace and in their own time. Sometimes it takes and entire book to get to know them. I loved getting to know Addy, past and present.

2. Who is your favorite character in this book and why?
I love all the people in this book, but Addy is my favorite. She has managed to retain such a sweetness in spite of the difficulties of her work and the fact that she is cut off from the people she serves by who and what she is. She never stops caring about the mortals in her life, even though she knows that she will have to watch them die. She treasures each person she meets, and her ongoing vulnerability is an essential part of her strength.

3.Why do you think people are still so interested in the gods of the ancient world?
I think the Greek gods in particular show us part of what it means to be human. In the old myths, they love and fight and struggle the same way we mortals do. In spite of their immorality and power, they long for connection the same way we do. I think the combination of immortal perspective and mortal emotion make for compelling storytelling.

4. Can you give us a taste of what's to come in the rest of the series?
The next novel in the Goddess Diaries is about Inez, who once was known as Isis of Egyptian mythology. A woman who has essentially given up her power and her work, when a series of murders begin across the globe mimicking the death of her husband Osiris, she finds herself drawn into caring about the world again by her deep desire to stop the killer. We got to meet Inez in APHRODITE'S CHOICE and I can't wait to get to know her better in book 2, GODDESS DESCENDING.

5. If you could bring three people, fictional or non-fictional, with you to a deserted island, who would you bring and why?
I think right now I would bring Inez and Addy, and Clive (addy's butler) to make the drinks. I would love to get Addy's and Inez's immortal perspective on the world and on life. And when we gt tired og our beach, they could call in some immortal favors and get us out of theire.

Thanks so much for hosting me, Meg. I am so glad that A Bookish Affair chose to be a part of this tour.