I am very happy to welcome Eileen Stephenson, author of Tales of Byzantium, here to A Bookish Affair!

History and historical fiction have always been my favorite genres, but if I had to choose one over the other, it would be good historical fiction – stories that show the pulsing blood of real historical characters and the turning points in history they brought about. Often, after I have read a historical novel, I find actual histories to tell “the rest of the story.” Only once, I think, did I start with the history and then look for novels.

Wandering through my local public library one Saturday ten or twelve years ago, I happened upon John Julius Norwich’s “A Short History of Byzantium”. Finding nothing else of interest, I borrowed it. Norwich’s introduction to the book included the comment that while there are many things you can say about the Byzantines, boring is not one of them. I rolled my eyes cynically at that extravagant statement, but continued reading.

How many ways can I say Norwich was right and I was wrong? His book blew me away with the fascinating stories of the men and women of this too often forgotten civilization. Their drama, struggles, wealth, and power make the Tudors and Romans look like pale imitations. By the end of the book I was hooked and started looking for anything I could find about the Byzantines.

Fortunately, there is a small industry of Byzantine scholars now translating many of the books and manuscripts written by the highly literate medieval Byzantines, as well as researching aspects of this long-lived civilization. I’ve collected many books on diverse Byzantine topics - coins, lives of children, women, food, buildings and even Byzantine paper dolls - to learn more about them. I also looked for novels, but found few. There are several novels about the 6th century emperor Justinian and his wife, Theodora, by Stephanie Thornton and Stella Duffy most recently. Cecilia Holland wrote a couple of novels taking place there; Anne Perry wrote a fine novel of the 13th century; and Gordon Doherty has written a solid series of soldier stories taking place in the middle Byzantine period. Most other novels including the Byzantines involved the Crusades. The Crusaders, who must have appeared to be coarse country bumpkins to the Byzantines, were suspicious of this sophisticated and wealthy empire, and invariably treated the Byzantines as sneaky and untrustworthy.

I should mention that I always had the idea in my head that I would like to be a writer and, of course, it would have to be of historical fiction. But the history that I was most familiar with – English and ancient Roman – seemed well covered by writers better than I could ever imagine being. Then, the more I read about the Byzantines the more aware I became that these were the people I was meant to write about – it was like a light going on that showed me the path to follow.

“Tales of Byzantium” includes three short stories taking place in the middle Byzantine period – one of an emperor whose writings are our best look back to the mid-10th century; the other two involve members of the Comnene dynasty that brought the empire back from the brink of catastrophe – a truly inspiring period.

The photos I am including are ones I took in Italy last year. The horses are the ones that stood atop the carceres, or starting gate, of the Hippodrome in Byzantium for close to a millennium before the Fourth Crusade took them to Venice where they have graced St. Mark’s since the 13th century (with a brief period in Paris, courtesy of Napoleon). The mosaic is in Ravenna and depicts the great 6th century emperor, Justinian I. At that time Ravenna was the Italian capital of Byzantium’s holdings there. 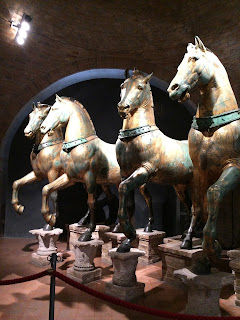 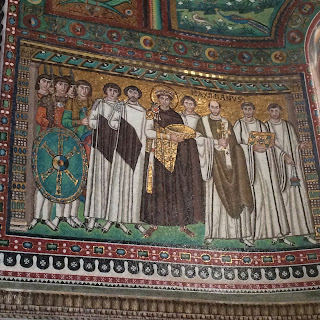 I would be interested to learn what impression or ideas any of your readers might have about the Byzantines. It is about time to clear the air and learn the real story of Byzantium after centuries of misleading stories and rumors!
Posted by Meg @ A Bookish Affair at 6:00 AM