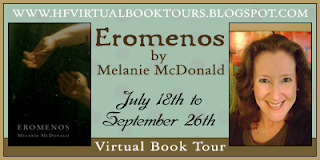 From Goodreads.com: "Eros and Thanatos converge in the story of a glorious youth, an untimely death, and an imperial love affair that gives rise to the last pagan god of antiquity. In this coming-of-age novel set in the second century AD, Antinous of Bithynia, a Greek youth from Asia Minor, recounts his seven-year affair with Hadrian, fourteenth emperor of Rome. In a partnership more intimate than Hadrian's sanctioned political marriage to Sabina, Antinous captivates the most powerful ruler on earth both in life and after death.
This version of the affair between the emperor and his beloved ephebe vindicates the youth scorned by early Christian church fathers as a "shameless and scandalous boy" and "sordid and loathsome instrument of his master's lust." EROMENOS envisions the personal history of the young man who achieved apotheosis as a pagan god of antiquity, whose cult of worship lasted for hundreds of years—far longer than the cult of the emperor Hadrian.

In EROMENOS, the young man Antinous, whose beautiful image still may be found in works of art in museums around the world, finds a voice of his own at last."

Ancient Rome has quickly become one of my favorite places to read about. Okay, really any book that has to do with anything involving Italy or the area that became Italy intrigues me. The Romans are fascinating to me. You have all sorts of larger than life personalities marching through all of the different stories about Ancient Rome. This story was new to me. I knew of Hadrian (my husband had photographed a lot of his villa while in Italy studying during college) but I did not know about the great love affair between Antinous and Hadrian.


You have handsome, young Antinous and aging Hadrian who almost seems to yearn for Antinous' youth even though Hadrian is an incredibly powerful emperor. Hadrian brings Antinous to Rome to study in one of the best schools. Hadrian and Antinous' love soon blossoms.

I really liked the character of Antinous, who is our narrator for this book. He is very young but learns very quickly the sort of games he must play in order to retain Hadrian's favor. He is also incredibly vulnerable and isn't sure that he can make Hadrian love him forever. At only a little over 150 pages, this book is short but we easily fall for the characters.

One of the highlights of the book is the descriptions. I was drooling over the descriptions of some of the food in the book. I thought the book also had a good sense of place. I could see the hills of Rome and the Roman Forum and the palaces.

One drawback to the shortness of the book is that I found myself wanting a lot more. The ending is good and gripping but I just wasn't ready to leave the characters quite yet!

Bottom line: This is a great book for any historical fiction lover!

One lucky A Bookish Affair reader will win a copy of this book!


Don't Forget To Follow The Rest of the Tour!:

Review at Bibliotropic
Review at By the By Books
Thursday, September 15th
Review & Giveaway at A Bookish Affair