Guest Post and Giveaway: Kristy Woodson Harvey, Author of Lies and Other Acts of Love

I am so pleased to welcome Kristy Woodson Harvey, author of "Lies and Other Acts of Love" here to A Bookish Affair today!

Lovey, the grandmother and one of the protagonists in Lies and Other Acts of Love, is a big fan of gumption too. In fact, one of the pieces of advice that she passes down through the generations in her family, and to her granddaughter Annabelle, the other protagonist, is that, “All a girl really needs to get through this life is a good dose of gumption.”

From Lovey to her five daughters to Annabelle, each of the women in this book, at some point, has needed a big, healthy helping of gumption to make it through.

Lovey’s story is one of true, lasting love, of commitment and grit, of a marriage that has had to ebb and flow a bit, as they all do. Lovey is dedicated and brave in the face of her husband’s illness, in her new reality of caretaker and in her new position as head of a very large family. She is brave not only for her daughters but also for the person who needs her to step up the very most: her husband. She fights for him every day, in ways big and small. And she is the bearer of some large secrets and has to make some tough decisions in light of those secrets, as you will learn as this story unfolds.

Annabelle is engaged to Holden, the perfect-on-paper man who she comes to realize might be the man of her mother’s dreams, but isn’t necessarily what she wants. She knows that marrying him is something she should want. But, as she comes to realize that maybe that isn’t enough, Annabelle has to use a big, giant dose of her own gumption to break it off—and perhaps even more gumption to tell her family. Annabelle is young and fresh out of college, and, at this point in her life, simply finding her way in the world takes a huge amount of bravery.

In their own small ways, each of the women in Lies and Other Acts of Love is a risk-taker. Each of the women in this story has to take a deep breath and make a hard choice to move forward. Annabelle’s mother, Jean, uses her gumption to run for mayor, lose, and then run again. Lovey’s sister gathers all of hers to move to London, during World War II, with her children and war correspondent husband. She stares her fear in the face every night as the bombs rain down on London. But she chooses to persevere through her fear.

Each of the women in this story is a risk taker in her own way. From the most outwardly brave to the ones that seem the meekest, each of these women comes to learn that living the life you want, even in the small ways, takes a big, heaping helping of gumption.

And a little bit of grace.

Lucky for each of them, they have Lovey, a perfect example who has displayed both of these qualities in the grandest way. 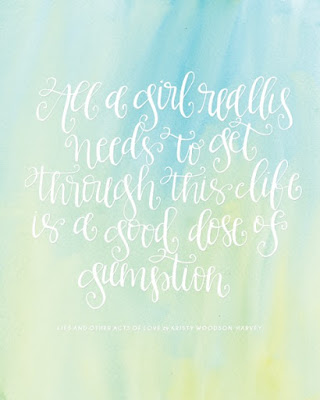 Want to win your own copy of "Lies and Other Acts of Love?" Just fill out the Rafflecopter form below!