I am very excited to welcome Peter Tieryas here to A Bookish Affair. He is the author of a few books, including his latest: "United States of Japan." See my review here! 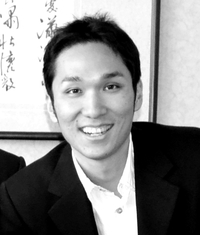 What inspired you to write "United States of Japan?"

I’ve actually been asked this a lot recently and in previous interviews, I’ve mentioned my desire to explore the tragedies of WWII, how people find their humanity in an authoritarian system that tries to eliminate all sense of conscience, as well as my love of Philip K. Dick’s The Man in the High Castle. But your question made me wonder, what really inspires me to write anything? There are other ideas that have compelled me. How do you pick one book over another that you commit X number of years to writing? And to me, it comes back a lot to the dynamic of the two main characters, Ben Ishimura and Akiko Tsukino, a thematic dialogue that’s been there from the very first draft (which is very different from its current form). Distilled into a more basic level, it’s emotions like hope and fear taken to a super extreme in the Empire and clashing with each other that ultimately motivated me and found expression through the characters.

Another big motivation was the fact that I was really curious about the world of The Man in the High Castle, wanting to know a whole lot more than what was on the page as well as what the world would be like ten, twenty, even thirty years later..

Why do you think people are so drawn to reading alternate histories?

I think the best alternate histories teach us something about our own world. One of the very first alternate histories I remember is Planet of the Apes which at first doesn’t seem like it has anything to do with Earth, before you realize, it’s all about humanity. In good works of alternate history, we quickly start seeing parallels to our own society and it’s those insights, only possible because we’re at a distance from ourselves, that make them so appealing. It’s way easier to criticize and see flaws in others, reflecting on its relationship to our own lives. But it’s much harder to take the critical lens and turn it to ourselves without that separation to illuminate it for us. With USJ, as much as that past was important, it’s also equally important to see how it connects to the present. I make references to their alternate dimension, our reality, in Akiko’s strange dreams, bouts of transwarp travel that point back at us.

Who is your favorite character in this book and why?

Usually, I have a favorite character or two. But I think USJ is the first one where I don’t have a favorite and I focused on trying to understand every character, regardless of what I personally thought of them. I can say my favorite characters to write were the Kujira mom and son pair, the mecha pilots who basically defy everything in that world and stand by their own set of moral codes. They form a counter symbol to the original mecha which stands for the empire. The Kujiras weave their own rules within its confines, even breaking out of it. I wouldn’t mind getting the opportunity to write about them some more because it was a real joy. They are a rarity in the world of USJ. Pure idealists who also stand for good and have the strength to back it up.

You've written a few books now. Has your writing process changed at all?

I’d actually love to hear your thoughts on if you’ve seen an evolution in my work, lol. =)  (Meg's note: Yup! There's definitely an evolution with your work. I really like how you grounded even the more outlandish things like the mechas in history and the natural progression of history. So cool!)

It’s such a privilege when a reviewer can see your work in context and examine it as a body rather than a work of its own. I’d like to think I’m getting better, faster, and smarter about the process. But honestly, United States of Japan was by far the hardest book I’ve written. I spent way more time in the editing process than my first two books. Maybe because of its alternate history nature where I was constantly checking the history, checking current tech, trying to make sure to root it in reality while not limiting myself to it. There are already lots of speculative leaps and I know I pushed the boundaries of it to serve the story. At the same time, having that history to support me made some things easier in a different way from, say, Bald New World, where I had to make everything up. (People have asked about the mechas, the technology the Axis was developing, and if it’d be feasible by the late 1980s. If you see some of the older railway guns and prototypes that the Germans and Japanese Empire were working on before the war ended, I think you’d be stunned at how advanced they were.)

Some things remain the same. I still outline, I still have multiple drafts with endless editing. One big difference is the amazing editorial support Angry Robot gave. Phil Jourdan is an amazing editor who I loved working with. I also had a copy editor, Phil Simpson, and two proof readers, Amanda Rutter and Trish Byrne, who were all fantastic and helped iron out the details. I’m really looking forward to working with them again.

If you could bring three people with you to a deserted island, who would you bring and why?

Probably the Genie from Aladdin so I could wish myself off the island. Then Kujira so I’d have a big mecha. Finally, my wife, Angela, because I can’t imagine going anywhere without her. I wouldn’t last long on an island (or anywhere else) without her.