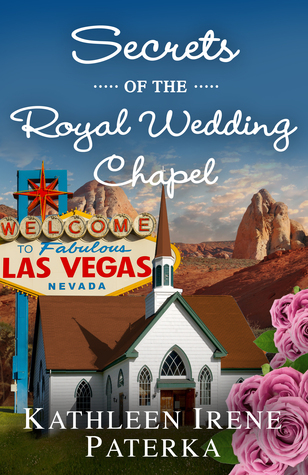 From Goodreads.com: "Immersed in the world of weddings and romance, Lily Lavender grew up believing in brides, grooms and happily-ever-afters. A direct descendant of the British royals, it seemed her destiny and royal birthright to someday assume a position as wedding coordinator in their family-owned wedding chapel business. But when her mother Mimi’s third marriage eventually fails, Lily’s dreams of her own happily-ever-after quickly fade. She’s no longer interested in a life of assisting brides walk down the aisle into a life of disillusionment and possible divorce. Lily turns her back on The Royal Wedding Chapel and leaves Las Vegas to fashion a life of her own.

Years later, Lily—now a single mom—discovers her teenage daughter has run off to Las Vegas, lured by Mimi to help run the chapel. Determined to save her daughter from the broken dreams of Sin City and the nonsensical world of which family fairy tales are made, Lily returns to Las Vegas. But nothing prepares Lily for the royal drama which awaits her… or the sins and secrets she stumbles across that threaten to close the chapel and ruin her family forever."

"Secrets of the Royal Wedding Chapel" is the story of Lily, who grew up watching her mom run the Royal Wedding Chapel in Las Vegas. Lily is a real list and wanted nothing to do with the wedding chapel but gets pulled back into her moms dromo when her daughter decides that she does want a piece of the family business. Willie has to swallow her pride and bite her tongue when her own mother faces health issues. This is a story with engaging characters about family secrets.

I have read several books by the soccer and as with her previous books I really enjoyed the characters in this book. The author does a great job of creating realistic characters that you want to follow. I'm a fairly no-nonsense person so will we felt right in my alley she has a hidden softer side that we get to know throughout the book. I love her character and also some of the secondary characters in the book. Lilly's mother Mimi is such a great character to follow she sort of lives in a fantasy world and his created this façade of the mystique of the royal wedding chapel. I love seeing how everything unfolded around how she created a tall tale.

The writing of this book is great. I hadn't read a lot that was set in Las Vegas so I like getting to see that city through this book. I also like the way that the author moves the story along through the characters. The author does a good job of letting out a little detail about a time that it kept me reading and kept me wanting to put together the mystery of the royal wedding chapel. Overall, this was a great story.
Posted by Meg @ A Bookish Affair at 4:00 AM