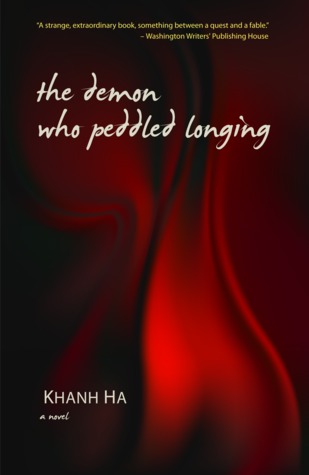 From Goodreads.com: "Set in post-war Vietnam, The Demon Who Peddled Longing tells the terrible journey of a nineteen-year-old boy in search of the two brothers who are drifters and who raped and killed his cousin. It brings together the damned, the unfit, the brave, who succumb by
their own doing to the call of fate. Yet their desire to survive and to face life again never dies, so that when someone like the boy who is psychologically damaged by his family tragedy, who no sooner gets his life together after being rescued by a fisherwoman then falls in love with an untouchable girl and finds his life in peril, takes his leave in the end, there is nothing left but a longing in the heart that goes with him."

"The Demon Who Peddled Longing" is the story of Nam, a nineteen year old boy who is in the middle of a journey that will take him all over Vietnam. He is looking for two brothers who raped his cousin. This journey will change him and will take him to meet people he may never have come across otherwise. Each character is struggling with something. These characters will force him to look into himself and to decide the kind of person that he will become. This is the second book that I have read by Khanh Ha and I continued to really enjoy his brand of storytelling.

This book is really hard to describe. It deals with some heavy topics. Nam is dealing with a lot and is a really fascinating character. He is trying to find who raped his cousins. He is also just trying to cope with becoming a man. The topics are heavy but the prose is almost dream-like and sometimes nebulous, which means you have to pay close attention to the book. The writing is also quite stark and I found myself wanting a little more detail about how Nam and some of the supporting characters were feeling. At first, I had a little bit of a hard time getting into the book but once I hit my stride, the story was enjoyable.

The author does not shy away from painting a very real and sometimes brutal picture of what post-Vietnam War Vietnam was like. In this book, we meet several characters that are truly struggling to make ends meet. While I found myself wanting more detail, I did like that the author did not candy-coat Nam's journey! Overall, this is a difficult story but those that appreciate writing that is off the beaten path may want to try this one.