Review: The Diviners by Libba Bray From Goodreads.com: "Evie O'Neill has been exiled from her boring old hometown and shipped off to the bustling streets of New York City--and she is pos-i-toot-ly thrilled. New York is the city of speakeasies, shopping, and movie palaces! Soon enough, Evie is running with glamorous Ziegfield girls and rakish pickpockets. The only catch is Evie has to live with her Uncle Will, curator of The Museum of American Folklore, Superstition, and the Occult--also known as "The Museum of the Creepy Crawlies."

When a rash of occult-based murders comes to light, Evie and her uncle are right in the thick of the investigation. And through it all, Evie has a secret: a mysterious power that could help catch the killer--if he doesn't catch her first."

I had heard really good things about this book but it isn't the sort of book that I usually read. When I saw that it was available as a downloadable audiobook from my library through Overdrive, I thought that I would give it a shot. I am most definitely glad that I stepped outside my box a little bit on this one. This book left me wanting more (at least The Diviners is only the first book in a planned series).

Okay, so I wasn't exactly looking forward to reading more paranormal and that's why I was hesitant about reading this book. I've been a little burnt out on the genre lately; however, I really liked the magic and the paranormal elements at play in this book. Bray does a really good job of sort of "normalizing" some of the paranormal-ness so that it fits in with the characters' world. Oh how I love magical realism!I was also a little hesitant because of the scariness aspect. Guys, I will admit to you that I am a complete wimp. Now back in my high school days, I went through Stephen King and other scary-ish books like water but at the ripe ol' age of 27, I have become a complete wimp. Some parts of The Diviners are a little creepy (the book does deal with a serial killer) but the creepiness was both warranted and not overwhelming!

This book also takes place in the Roaring 1920s. You all know that I love historical fiction and I've been craving reading more about the 1920s. I just think it was such an absolutely glamorous time. The Diviners is filled with all sorts of 1920s goodness. The main character, Evie, is a flapper. Another one of the characters, Theda, is a dancer at the Follies. Another one of the characters, Mabel, is the daughter of Communists. Bray brings some many of the topics du jour of the 20s to life through her characters. This book takes place in New York City, which is an exciting setting for me just about any time but Bray really brings 1920s NYC to life. All of the glitz and glamour is there!

There are a lot of characters in this book. One thing I worry about with a large cast of characters and listening to the book is that I won't be able to keep track of who is who or who is speaking. Bray's characters are all incredibly unique so it was very easy to keep track of who was who. Also, the reader of the audiobook is incredibly. She sings. She speaks in accents. She does it all. I think I would have enjoyed reading the book in print but the narrator in this case made the audiobook experience really great.

As I mentioned, there are a lot of characters in this book. At first, you are wondering how they are all connected as each of their stories are being told separately or at least in conjunction with Evie's story (Evie is very much at the center of the story). I really loved how Bray was able to bring all of the characters together. It was very cool!

Right now, Goodreads has the next book in this series coming out in 2014. This makes me a sad panda. I need that book now please! 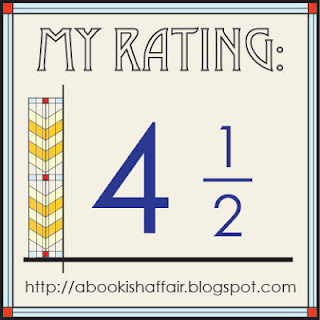