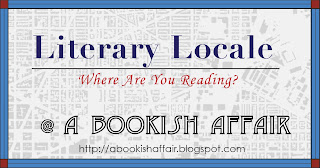 Literary Locale is a meme here at A Bookish Affair on Fridays where I talk about where I've been reading lately or any other bookish locations that I feel like talking about. Feel free to grab the logo and play along!

So as you all may remember, I attended the Historical Novel Society Conference in gorgeous St. Petersburg, Florida last weekend. It was a really, really amazing event and I'm so happy that I went. I'm still bathing in the afterglow of the conference but I figured that it was time to tell you all about my experience at the conference. Sharing is caring, you guys!
I spent the entire weekend like this (or at least trying to be like this; sometimes I just sunk into total fangirl-dom and you know, I'm totally okay with that):

I got down to St. Pete's a day early as I wanted to prolong this vacation a little bit. It's been awhile since I've really gotten to go on vacation so I figured I should enjoy St. Pete's a little bit. And I did! I visited the Dali museum, which I will talk more about in the next edition of Literary Locale next week. I also walked a 4 mile roundtrip to CVS, which I will not tell you about because it made me very sad to be walking so far to someplace so un-glam in the hot, sticky humidity.
The conference was held in the gorgeous Hotel Vinoy, right on the gorgeous Tampa Bay. It was an awesome hotel and it was pink! I loved that the hotel was on the bay because it meant getting to see a lot of pelicans, which I find ridiculously adorable!

Thursday night, I was sitting in the lobby (this hotel had a fabulous lobby with a lot of comfy places to sit. Sharman Burson Ramsey came up to me and asked me if I was here for HNS. I said yes and we started talking. She is incredibly nice and this little interlude just illustrates how amazing all of the attendees of the conference were. I know that HNS is supposed to be for everyone and not just authors but the majority of people in attendance were authors and I was a little worried about feeling like the odd man out. This was totally not my experience at all though! Everyone I met (and I met a ton of people) was absolutely amazing and just so awesome.

The real fun started on Friday night. First I went to the Tweet and Greet for those of us that planned to tweet during the conference (if you follow me on Twitter, oh you know how much I tweeted). I got to meet awesome people like Julie Rose, Heather Domin, Kate Michael, and Amanda Orr for the first time.  I won a pack of awesome HNS stationary just for tweeting on Twitter (I wish I won more stuff that way). Then it was time for dinner. I sat with several people from my local HNS Chesapeake Bay chapter including the lovely Stephanie Dray, Sophie Perinot, and Kate Quinn.  Anne Perry spoke at the dinner. I really liked her speech. She sort of talked about the art of storytelling and historical fiction's role in that realm. She had a very strong and commanding presence.
Oh and the highlight of my evening personally was that The Margaret George (whose name must always be spoken in bold and italics due to her queenly status within the literary community) was at our table. She was sitting about two people away from me and I could not speak to her. This is what I did during dinner to her (I'm almost sure of it; I'm a creeper):

Saturday was when all of the seminars started. There were a lot of really interesting ones and many of them seemed to be happening at the same time as each other and I was sad to miss out on some of them.
Here is what I ended up attending:
We broke in the middle of the sessions to have lunch. C.W. Gortner was the speaker at lunch and definitely gave my favorite speech of the weekend. I have been a big fan of his books for awhile and even merely from that perspective, I was excited to see him speak. He gave a really inspiring speech about why it's so important to not give up your writing even the road to getting your writing published can be long and more than a little arduous.
After the sessions, it was time for the book signing. Many of the authors that were in attendance also signed books. There was a little book shop at the conference and I must tell you that I went absolutely wild with getting books to be signed. I could not help myself! I will show you all what I got soon. It's going to be like Christmas when I open that box!
Then it was time for dinner. The keynote speaker was Steve Berry, who writes a lot of thrillers that have a tiny bit of history thrown in the mix. His speech ending up being sort of a strange one for the audience. He spoke about a very small legend about Elizabeth I dying in childhood and being replaced by a man. Okay, and to point out what may perhaps be an obvious fact, he said this in a room full of people who take research pretty seriously. I'm not sure why he was chosen but I think that there were many other people already at the conference that could have been chosen to speak. I'm trying to be very diplomatic about this part of the conference but it is not quite working. I just have a lot of feelings about this speech so I will quit while I'm ahead!
After dinner, there was a costume contest that was so much fun. People got really creative with their costumes. Gillian Bagwell did an amazing job hosting the contest. She was in character the whole time! Teralyn Pilgrim (who I loved meeting) was a Vestal Virgin with a visibly pregnant belly. It was very, very funny! History has never seen such a thing!
After the costume pageant and Steve Berry's speech, it was time for the Sex Scene readings hosted by The Diana Gabaldon (whose name must also be in bold, italic font). This session was a blast. Let me just say that the readers are much braver than I would be! They all did a great job!

On Sunday, I woke up a little tired but still raring to go to more sessions. Here's what I attended on Sunday:
Then I met up with the lovely Audra (Unabridged Chick) and we had to go upstairs to the lobby to rehash the Steve Berry speech as we were both so fired up about it! We had ALL OF THE FEELINGS and had to discuss them post haste! We ended up having an impromptu blogger lunch with Sarah (Reading the Past) and Heather (The Maiden's Court), which was super nice.
I had an opportunity to hang out with a lot of people after the conference technically ended. Sunday night, I dragged Sarah, Marie Parsons, Jessica Brockmole, and Alison Atlee to this sushi place called Rollbotto. Guys, this place was life changing. It's like Chipotle for sushi. All of these ladies were good sports and indulged me by going to Rollbotto. Between Thursday and Sunday night, I went to that place three times. If you ever find yourself in St. Pete's, I certainly have a restaurant suggestion for you!!!
I absolutely loved this conference! This was the first book conference that I had ever really been too. I can be a little shy when I first meet you and I was a little bit worried about meeting authors and whether or not they would want to talk to me because I'm not a writer, just a lowly book blogger. It wasn't at all like that. Everyone was so darn nice and social and sweet and amazing! It was so cool to be surrounded by so many people who have the same interests and passions that I do! I had nothing to fear and I actually had a lot of people that complimented my little blog here (you know how to make a girl feel good). I came back from Florida feeling really happy that I went and very sad that the HNS conference is only held here in the States every other year! I know that I will be back for 2015 though!