I am so very pleased to welcome Eva Stachniak here to A Bookish Affair. I loved her Catherine the Great books and if you saw my review yesterday, you know I enjoyed her latest, The Chosen Maiden! 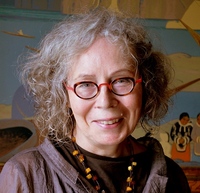 Where do new novels come from?

Mine often develop from fragments of the previous ones, a scene cut short, a thought abandoned because it doesn’t quite fit. So it doesn’t surprise me that I can trace the first stirrings of The Chosen Maiden to The Winter Palace, to the research I did on a Viennese dance-master preparing Catherine the Great’s son, future Paul I, for a ballet performance at the Hermitage. My notes from the time contain remarks on the close relationship between the Imperial court and Russian ballet, and a reminder to take a closer look at the Artists of the Imperial Theatres, especially at the time when Catherine’s legacy was coming to its violent end. I did take a closer look, and this is when I came face to face with Bronia Nijinska, a brilliant dancer and choreographer who came of age just as the Imperial Ballet, once an obedient and obliging child of the court, broke into open revolt and began to assert its own vision of how Russian art should evolve.
What drew me to Bronia? There was, of course, the tantalizing connection to her beloved elder brother, Vaslav, the God of the Dance (he was her mentor but she was the best interpreter of his choreography). There was the Polish connection (both Nijinsky parents came to Russia from Poland and Polish was Bronia’s mother tongue). There were her choreographic visions forged in the cauldron of revolutionary Russian art which secured her a firm place in the history of modern dance. But, in the end, as I pored over the treasures of the The Bronislava Nijinska Archives at the Library of Congress—boxes of intimate diaries, letters, notes and hundreds of snapshots she took of her family and friends—that the two main themes of The Chosen Maiden began to emerge: art as the source of inner strength, and the steadfast solidarity of the three generations of the Nijinsky women.
It was Bronia’s passionate belief in the power of art that gave her strength to fight for her own place first in the Imperial Theatres of St. Petersburg and then in the predominantly male focused Ballet Russes. It was art that stoked her resilience at the times when others told her she didn’t have the body of a ballerina or that she should content herself with interpreting her brother’s visions and not bother with her own. It was art that gave her the courage to resist the repressive regimes determined to engineer her soul. And, in the end, it was art that made her pick herself up after each paralyzing loss life dealt her and to keep on fighting.
But art would not have been enough to protect her from defeat, not without the fierce power and loyalty of the Nijinsky women.
For as the men are erased from the family story by choice or by cruel fate, it is the women, Eleanora, Bronia and Bronia’s daughter Irina, grandmother, mother and daughter, who take their place. Proud and strong, steadfast, nurturing and fiercely loyal, they stand by each other, even in the hardest of circumstances. As the world around them is torn apart by wars and revolutionary upheavals, they know that they cannot afford to be weak. The existence of their family depends on them.
This is a story which most Eastern European families, including my own, know by heart.
And so as soon as the plot of The Chosen Maiden began to take shape in my mind I found myself transported to the arms of the Polish women of my childhood, my own grandmother and mother. They too were brave, nurturing, tough as nails, stoic in their assessment of the dangers and possibilities of salvation, determined to wrench any chance they could from the little that they had. Born in what would one day be called the Bloodlands of Europe, between them they lived through two world wars, a revolution, a Nazi occupation and years of communist repression. Having experienced staggering losses they still found a way to keep me safe and hopeful.
If the door closes, climb through the window. You fell? Pick yourself up and keep going. We’ve come through worse times and we didn’t give up. Stop crying and try harder. Resist when fighting is not possible. Remember, we are watching you.
These voices are still in my head. Voices I am still grateful for.

Want a chance to get a copy of The Chosen Maiden for yourself? Just fill out the Rafflecopter form below (U.S. only, please!)