A note from Meg: I read "The Chef's Secret" when it was first released and it is oh-so-good (if you're interested, you can check out my review here). I knew that when a HFVBT tour came up, I had to highlight the book again! If you love historical fiction, Italy, or delicious food, this is the perfect pick for you! Enjoy this guest post by Crystal King!

By Crystal King, author of The Chef’s Secret and Feast of Sorrow 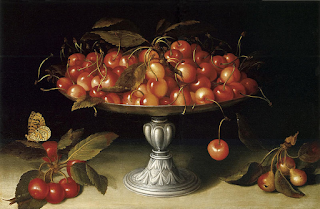 As a child living in Washington state, I grew up eating sweet Rainier cherries. We even had a cherry tree in our backyard. I remember my mother canning them every summer (and here’s a link to a recipe if you want to go nuts), and having a bowl full of preserved cherries in the middle of winter was a special treat.

I’m not the only one that has grown up with a love of cherries. Millions of people all over the world, through the centuries, have loved this tiny fruit. The first record we have of the cherry was that Roman consul, politician and military conqueror Lucius Licinius Lucullus brought them to Rome from Turkey in roughly 72 B.C. I wrote my first novel, Feast of Sorrow, about the first century ancient gourmand, Apicius, whose name is on the oldest known cookbook—a cookbook which includes instructions on how to preserve cherries.

The subject of my second novel, The Chef’s Secret, is a cook named Bartolomeo Scappi, who published a bestselling cookbook in 1570 called L’Opera di Bartolomeo Scappi (the works of Bartolomeo Scappi). It contained over 1,000 recipes and was a bestseller for nearly 200 years after his death. There are 26 recipes for cherry dishes including pies, pastries and for sops. What are sops? Do you know of the dish “Sh*t on a Shingle” (chipped beef on toast, a popular military ration in the past)? That is an example of a sop, which is any type of sauce meant to be served on toast.

Scappi’s cookbook has 218 recipes for the sick, including "prepared potions, broths, concentrates, pastes, barley dishes and many other preparations needed by the sick and convalescent.” Interestingly, some of the most delicious—and sweetest—recipes appear in this section of L’Opera.

I was immediately drawn to Scappi’s recipe for cherry sops, which is extraordinarily simple and hearty, and I, if I were sick and someone served it to me, I'd probably down every last bit of it. But it's even more delicious if you are healthy and want a bit of dessert. 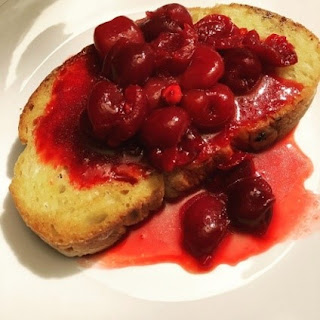